Not all market players experienced the same “crisis year” in 2016: while Swatch Group and Richemont have been strongly impacted by their exposure to Greater China, independent brands like Rolex, Patek Philippe and Audemars Piguet have coped well with a difficult economic environment.

Not all market players experienced the same “crisis year” in 2016: while Swatch Group and Richemont have been strongly impacted by their exposure to Greater China, independent brands like Rolex, Patek Philippe and Audemars Piguet have coped well with a difficult economic environment.
T

hese are just some of the key findings of the latest report by Vontobel’s René Weber, which forecasts a market turnaround this year.

“We believe that in five years’ time, around one third of quartz watches will have a chip in their movement.”

You expect a – relative – turnaround in watch sales this year and predict a +1% growth in 2017. What are the conditions for this change?

There are two main reasons for the improvement. First, we believe the Chinese tourist will come back to Europe and we expect a double-digit increase in the number of Chinese visitors. Second, Hong Kong, which remains the most important market for Swiss watch exports, still has a high inventory level, but after a decrease of 25% in 2016 in Swiss watch exports, the decline will clearly slow down in 2017.

Nevertheless, the overall value of Swiss watch exports was still declining at the beginning of the year, and Hong Kong still seems to be on the decline.

The turnaround started in March: it also benefits from an easy comparison base as this month was in 2016 one of the weakest (-16%). This phenomenon is valid throughout the coming year, for example June 2016 was also -16%... 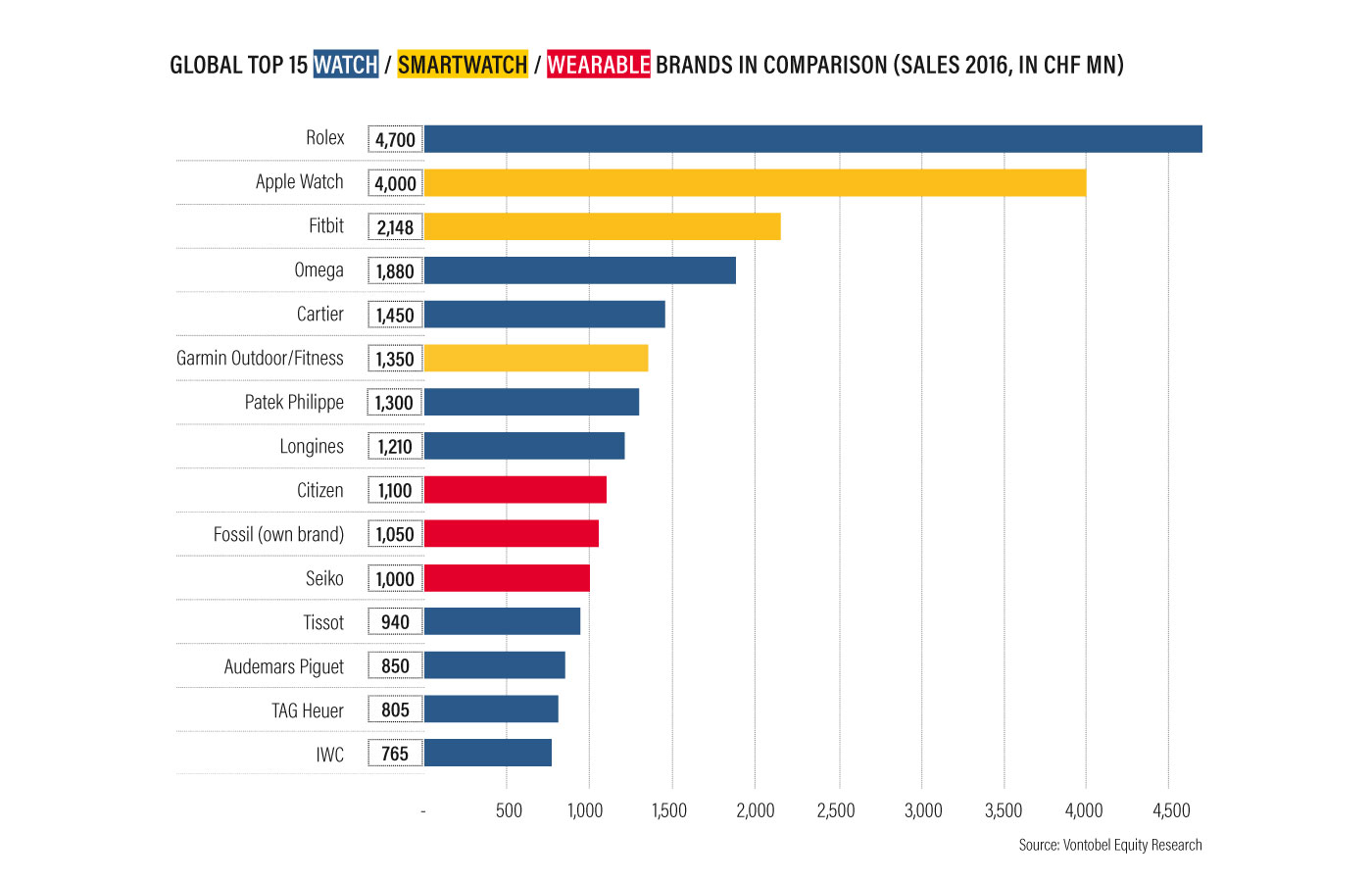 A symbolic evolution that you observe is the fact that Rolex is now bigger than the whole of Richemont Group. How do you explain this?

Rolex did not experience a decline in sales in 2016, whereas in Richemont some brands had double-digit declines and the inventory buybacks had an impact on sales as well.

Independent brands like Rolex, Audemars Piguet and Patek Philippe seem to fare better than multi-brand groups like Swatch Group and Richemont Group. Are they more resilient in times of industry crisis, and if so why?

The three mentioned brands have a smaller exposure to Greater China and therefore felt the negative impact from Hong Kong less than Swatch Group and Richemont. At Patek Philippe and Audemars Piguet, there is also limited production and therefore some watches have waiting lists and make the brands more desirable.

“It is the first time for more than 10 years that the Japanese watch producers are doing better than their Swiss counterparts.”

The Japanese brands Casio, Citizen and Seiko also gained market share in 2016. How?

The market share gains were mainly due to exchange rates, but they also benefitted from a local market which was less negative than the global watch market. It is the first time for more than 10 years that the Japanese watch producers are doing better than the Swiss counterparts.

You very much focus on high-end brands or groups. But what developments have you noted in the affordable range, be it with Fossil Group, Movado Group, or newcomers like Daniel Wellington which seem to do especially well with younger generations?

Beside the high-end brands, we saw already in 2016 that the upper-end segment (Longines, TAG Heuer) was doing better than the overall Swiss watch market. Whereas total Swiss watch exports declined 9.7% in value, this represented just -3.9% at the upper end, but -11.6% at the very top. The over-proportional decline in the high end was mainly due to a strong decline in gold watches (-19%). The affordable range had an impact from smartwatches, with some of them, especially Fossil, pushing this segment strongly. In the Swiss watch industry, the low end (Swatch brand) was -10.1% and the mid range (Tissot) -9.5%, whereas Fossil’s sales were –4% in stable currencies.

As we pointed out in our recent dossiers, all brands seem to be very careful with pricing. Do you share this observation and what are the most interesting examples of this evolution in your view, in terms of affordable new watches?

We have seen in 2016 for the first time a decline in the average price for the highend segment, which was driven again the decline in sales of gold watches. At the SIHH and Baselworld you could see that most of the brands have pushed their launches at the entry price level of the brand and there were more steel than gold watches. We also saw that brands like TAG Heuer pushed their prices down and Longines was introducing new quartz watches at Baselworld. Also, some high-end brands unveiled for the first time a collection in steel (Piaget, H. Moser & Cie).

In terms of new products again, you point out the conservatism of the brands at this year’s fairs of SIHH and Baselworld. Still, are there any interesting strategic developments that you would emphasise on the product side?

I would point out one in particular: for me, an interesting move was the cooperation between Breitling and Tudor, with Tudor using the Breitling chronograph movement and Breitling introducing the Tudor three-hand movement into their watches.

You also point out that smartwatches essentially “bite” into the market of traditional affordable quartz watches. As mentioned, Longines recently launched a new highly precise quartz collection. But is there a future for non-connected quartz watches?