“Today internet sales represent just 2% of our total sales. It is more about being involved in the process. I’m convinced that we should retain our mono-brand boutiques and our presence in multi-brand stores, but also in some countries it’s important to be on the internet.”

THE SLOW AND OPEN SOURCE MOVEMENTS

are starting to gain a foothold in watchmaking!

According to Global Blue, a Chinese tourist spends an average of 11,000€ on luxury goods during an overseas trip.

“When I speak with friends at IWC they say that women want to buy men’s timepieces. They want the bigger sizes and they want the technology, because often women’s watches are only quartz.”

In 2000, mechanical watches accounted for 8% of the watches leaving Switzerland; in 2013 they represented 27%.

The Swiss watchmaking industry reported that exports in 2013 represented a turnover of $23.3 billion. During the second half of 2013, Apple announced a net profit of $20.6 billion.

“When mobile phones and devices came on the market, we were asked about their impact on our industry. The media were already anticipating the end of watches; however, it was just the contrary.”

Some 44% of watch executives see smartwatches as the “next big thing” for the watch industry, according to Deloitte. “While relatively few view smartwatches as a threat, their introduction has been gaining momentum, leading a significant number of participants to start to take this emerging category more seriously.”

Google has partnered with American watchmaking group Fossil as part of its Android Wear project. The aim: to adapt its mobile operating system to the “internet of things”, beginning with smartwatches. Intel has also announced a new collaboration with Fossil to develop wearable technologies.

“Beginning in 2015, we will integrate fitness functions into the Swatch Touch. It will remain a watch, but it will have all today’s usual functions for monitoring physical fitness.”

What do you think of the faces of today’s most popular smartwatches? Have your say about their design. 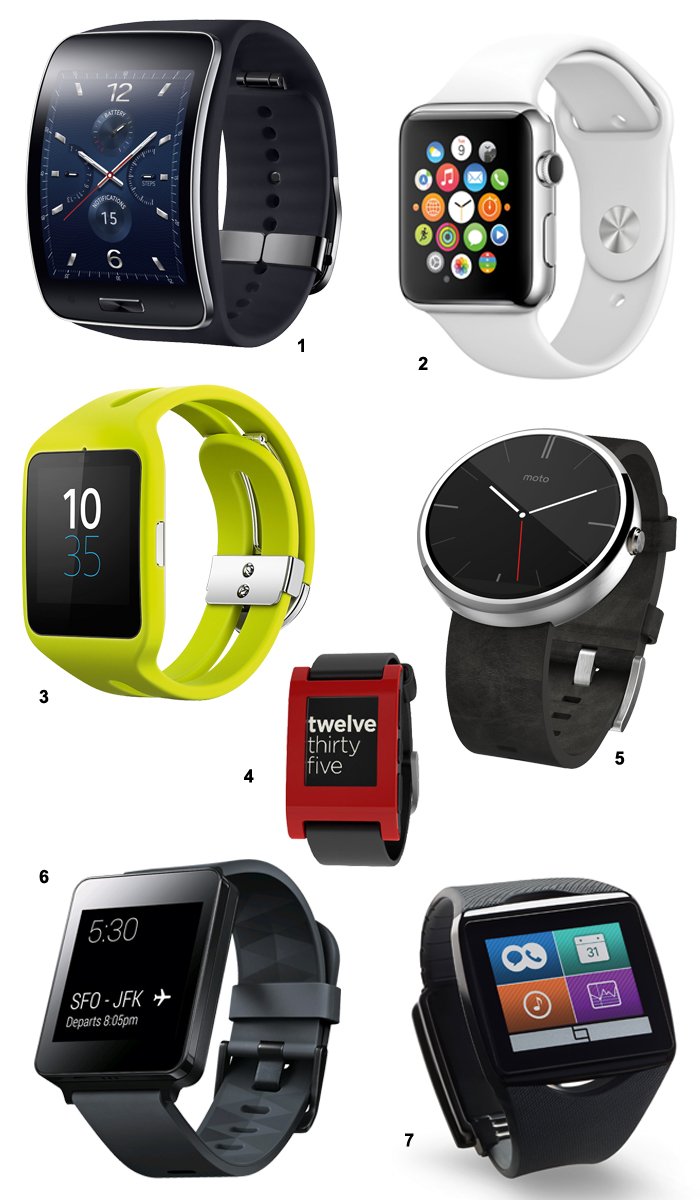 For 29% of potential smartwatch clients, the number one function of connected watches will be to track sports activity or provide health monitoring. Making calls comes in only second place (13%), ahead of telling the time (11%), basic applications and GPS (10%), call and messaging alerts (9%) and internet search capability (7%). These are the conclusions of an online survey conducted by GfK among 5000 smartphone users based in the United States, the United Kingdom and China.

“We want to launch a smartwatch at TAG Heuer but it must not copy the Apple Watch.”

“According to a designer who works at Apple, Jonathan Ive, Apple’s design chief, in bragging about how cool he thought the iWatch was shaping up to be, gleefully said Switzerland is in trouble — though he chose a much bolder term for ‘trouble’ to express how he thought the watchmaking nation might be in a tough predicament when Apple’s watch comes out.”

“We are part of an old and proud industry. Every year we’ve experienced change in some way. We have seen the introduction of quartz movements, the rise and fall of calculator watches, digitals, analogue-digitals and many brands, both big and small. It seems that the test of time has shown that the wrist is an obvious place for both function and fashion.”

The Global Luxury Watch Index established by Digital Luxury Group (DLG) is based on 600,000 queries made every single day on search engines, for 62 luxury watch brands and over 1,500 models. It gives an indication of the desirability of the watch industry over time. Here are the exclusive latest results: 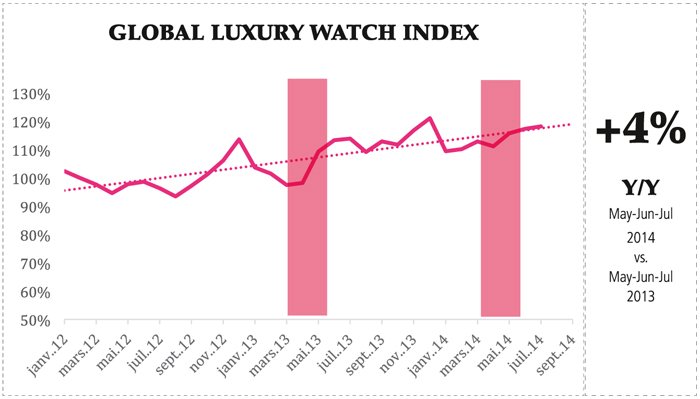 “This period we’ve seen a worldwide growth of interest for the luxury watch segment of +4% (Y/Y). This growth is mostly driven by more and more interest for Rolex.” 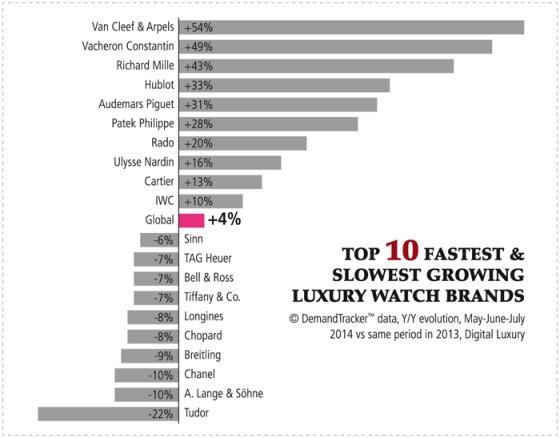 The brands that have seen the biggest rise in interest over the last year are Van Cleef & Arpels, Vacheron Constantin and Richard Mille.

Sales figures have decreased for the third year running, losing a total of 6% in both value and volume for 2012/2013. During the first half of 2014, sales volume dropped by 5.2% and value by 4.2%, in a market estimated at around 14 million watch sales annually. According to the Federation of the Swiss Watch Industry (FH), imports of Swiss watches over the first seven months of 2014 were down 7.2%, which is a whopping 17.1% compared with the same period of 2012. Shops and boutiques are feeling the sting of the recession, particularly where sales of sub-100 and 3000-plus euro watches are concerned. But as a top tourist destination, France can take comfort from its luxury shoppers who, although they represent just 1% of sales volume, account for 25-30% of value. So, are there any positives? Yes, internet sales continue to grow, recording an increase of 7% in volume and 4% in value over the first half of 2014, despite the fact that e-commerce still represents just 5-8% of total watch sales in France.

Although the Chinese economy is under pressure, Swiss watch exports increased in value by 3.6% in the first seven months of 2014, although this represents a decrease of 14.6% over the same period of 2012 (FH figures). In the first half of 2014, according to the Chinese national statistics office, sales of watches costing over 30,000 yuan (approx. CHF 4,500) dropped by 40%, while the mid-range sector performed surprisingly well. The 218 companies that make up the fabric of the Chinese watchmaking industry posted collective earnings for the first half of the year of 15.3 billion yuan (CHF 2.3 billion), an increase of 9.3%. Chinese brands finally appear to be gaining ground: a welcome effect, according to the China Horology Association, of Chinese consumers’ growing interest in and understanding of watchmaking products.

In value terms, Hong Kong remains the most important market for imports of finished watches in 2014, and number two for the export of finished watches (its main markets are Switzerland and the United States, with a 16% share each). Over the first seven months of the year, exports of finished watches increased by 3% compared with the same period last year, and component exports grew by 12%. Swiss watch imports increased by 3.4%, although this represents a drop of 6.4% compared with the same period of 2012. Over the first five months of this year, local retail sales dropped by a worrying 28.2%; this probably reflects caution on the part of Chinese consumers, who make up 90% of customers.

Judging by export statistics for the first half of 2014, “Made in Japan” watches are going upmarket; although volume has risen by a scant 2% (29.3 million units), its value has leapt 15%. Sales volumes on the domestic market have increased by 9% (3.8 million units) with a corresponding increase in value of 24%, a success due partly to the boom in sales of mechanical watches (up 52%, to 135,000 units), although they still represent just 3.5% of the Japanese market. As far as Swiss watch imports are concerned, the first seven months saw the greatest increase across all markets, reaching 24.4% (FH). However, May saw a rise in consumption tax which checked the surge recorded in the first four months of the year. On a positive note, tourism in Japan is experiencing strong growth, helping to stimulate the market.

South Korea recorded the second highest growth in Swiss watch imports (after Japan) for the first seven months of 2014, with an increase of 23.4% (FH figures). Over the last ten full years (2004 to 2013) the Land of the Morning Calm has tripled its watch imports (across all countries, including 95% finished watches), with sales figures rising from 197 to 625 million dollars. One explanation for this is the free trade agreement that was negotiated with Switzerland in 2006. However, South Korea’s new president, Park Geun-hye, is not well disposed towards Swiss watch imports, pointing in particular to serious problems with after-sales service. The government is also considering new laws to increase consumption tax on luxury goods (including watches) to 30%, with a view to breaking up monopolies. Exports of Korean watches and clocks have decreased by 32% over the last ten years. However, the Korea Watch & Clock Industry Cooperative does not (yet) categorise smartwatches in the watch category. It is worth noting that Credit Suisse predicts the market will grow to 50 billion dollars by 2017, with Korean giants Samsung and LG leading the charge.