Haute Horlogerie under the watchful eye of the WorldWatchReport 2012


Haute Horlogerie under the watchful eye of the WorldWatchReport 2012

As each year during the Salon International de la Haute Horlogerie (SIHH), the Digital Luxury Group publishes the principal results of the Haute Horlogerie category in its WorldWatchReport™, a reference study for the watch industry. With its analyses of millions of anonymous and spontaneous searches by people looking for watch products on the main international search engines (Google, Bing, Yandex, Baidu), the WorldWatchReport™ provides an original look at the preferences and interests of watch consumers. For the first time since its creation in 2004, the report covers 20 key markets of the industry as compared to 10 last year.

China is now the world’s number one market for watch-related searches. 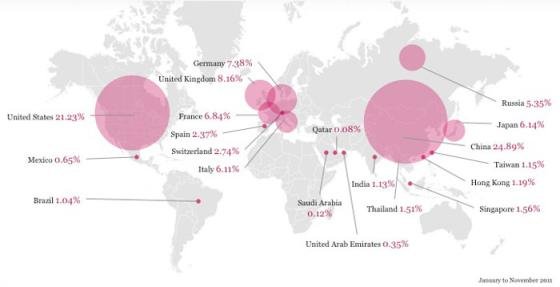 For the first time since the launch of the WorldWatchReport™ in 2004, China has surpassed the United States as the market with the highest number of searches for Haute Horlogerie products, with nearly a 25-per cent share of the global market. A sign of the times, the demand from the USA (21 per cent) decreased five percentage points compared to 2011. The top three include the United Kingdom with 8 per cent), ahead of Germany with 7.3 per cent and France with 6.8 per cent.

Like last year, IWC (23 per cent), Patek Philippe (16 per cent) and Zenith (11 per cent) capture 50 per cent of the searches for Haute Horlogerie on a global scale.

At the heart of the Chinese market, Patek Philippe—along with Vacheron Constantin—are the favourites of internet surfers in the capital, Beijing, while the young and urban consumers show a definite preference for IWC.

The title of most searched-for watch goes to the Royal Oak by Audemars Piguet. 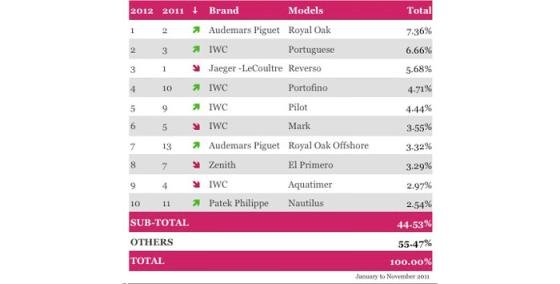 Jaeger-LeCoultre loses its previous first place position that it held for the most searched timepiece. Its Reverso model has now been out-searched by the Royal Oak by Audemars Piguet and the Portuguese by IWC, which occupied the second and third positions last year.

The Schaffhausen-based brand is the best known among Haute Horlogerie clientele. Five of its models are in the top 10 for international searches. On the other hand, most of the popularity of Patek Philippe is due to its brand name since only its Nautilus model made it into the top 10.

We should also mention that the first place held by Audemars Piguet’s Royal Oak is supported by a large increase in searches in western markets, particularly the United States, the United Kingdom and Italy.

IWC and Jaeger-LeCoultre shine in their social networks

Present on Facebook, Twitter and Sina Weibo, IWC is the most advanced Haute Horlogerie brand in terms of social media. On Facebook, IWC has a community—nearly 230,000 strong—that is more than twice the size as that of its nearest competitor, Jaeger-LeCoultre (85,000), while maintaining a high level of engagement, which measures the interest and the reactions caused by the brand’s publications. This turns out to be a better indicator than only the number of fans to measure the real performance of a brand on a social network.

We should also mention the excellent performance by Jaeger-LeCoultre on social networks. The brand’s recent efforts—for example, its treasure hunt on Facebook or its positioning on niche platforms such as Instagram—are paying off since they have allowed it to surpass Audemars Piguet and Zenith, both in terms of the number of fans and the level of engagement.

Among the 15 brands analysed, Patek Philippe is the only one to still not officially have a presence on social networks.

The explosion of searches from mobile devices

On a global level, 17 per cent of searches for Haute Horlogerie products is carried out on mobile devices. The proportion of mobile searches is particularly high in Japan, where it represents nearly one search in two, compared to an average of 10 and 15 per cent in the majority of western searches.

When they search for information about a point of sale, consumers are twice as likely to do it on a mobile device rather than on a computer. This trend is going to force brands to optimise their presence on search engines in order to redirect their customers to the stores closest to where they are.

The results of the complete edition of the WorldWatchReport™, covering 40 brands and 20 markets, will be published in partnership with Europa Star and the wonderful support of the Fondation de la Haute Horlogerie during BaselWorld next March. We will cover it again in a future edition of Europa Star.