By the end of 2012, the 62 most sought-after luxury watch brands regrouped nearly 50 million fans on Facebook, growing by +135%*, according to the WorldWatchReport™, the leading market research in the luxury watch industry produced by Digital Luxury Group, now in its 9th edition. The most successful brands per category were: Louis Vuitton (Couture) with 12,170,512 fans, Tiffany & Co. (Watch and Jewellery) with 3,513,922 fans, TAG Heuer (Prestige) with 805,731 fans, Montblanc (High Range) with 374,729 fans, and Audemars Piguet (Haute Horlogerie) with 167,333 fans.

“The majority of brands are still using Facebook as a news distribution platform.”

Brands are increasingly proficient at creating interactions with fans, although the engagement rate is not evolving anywhere near as quickly, having increased by only +5.13% (from 0.78% in 2011 to 0.82% in 2012 at a constant perimeter excluding Couture brands). For WorldWatchReport™ contributor and Underthedial journalist, Ian Skellern,“After finally appreciating the importance of Facebook and committing resources to developing large audiences, the majority of brands are still using Facebook as a news distribution platform rather than trying to actively engage their audience. This is highlighted by their relatively low interaction rate. To realise the full potential of Facebook and other social media platforms, brands need to start creating interactive content that their readers want, rather than simply chasing non-interacting Likes with an endless stream of self-promotion.”

Couture brands (Chanel, Dior Watches, Hermès, Louis Vuitton, Ralph Lauren), however, aided by the exposure of their fashion background, lead the way for the highest volume of Facebook fans (all in the millions). They not only have a large audience but also possess the know-how to engage it. Last year, the category was led by Dior, followed by Chanel, but this year Louis Vuitton went from third to first place with over 12 million followers, although Dior fans are slightly more engaged with the brand on the platform than Louis Vuitton.

2013 saw Rolex launching its official Facebook fan page at BaselWorld. The crown brand already counted nearly 300,000 fans at launch. As of July, the no. 1 most sought-after brand in the WorldWatchReport™, is at almost 1 million fans (876,000) in just 3 months. Patek Philippe remains one of the last few major luxury watch brands absent from Facebook. “The Geneva based brand is usually shy to experiment with new media first, preferring to consider the potential risks before making a move. This is based on the brand’s inner culture and the fact that it is a leader in its respective market. Being on top you have more risk than the followers but leaders also have more latitude,” explains William Rohr, TimeZone Co-founder and Digital Luxury Group Non-Executive Partner.

Amongst the Prestige category in 2012 (Breitling, Corum, Hublot, IWC, Omega, Panerai, Rolex, TAG Heuer and Zenith), TAG Heuer outperforms its rivals thanks to an early strategy of creating separate customised Facebook pages for its major markets. This “Think Global, Act Local” strategy has allowed the brand to be one of the few watch-only brands gathering almost one million fans and in some markets, to be on the same playing field as Couture brands who logically are leading on Facebook – benefitting from their strong and international fashion fan base. Not only leading in number of fans, the LVMH-owned watch brand demonstrates favourable engagement results (0.51% engagement rate) surpassing Prestige category challengers IWC (0.39% engagement; 460,000+ fans) and Hublot (0.16% engagement; 360,000+ fans). Besides ambassadors and sports event related postings, TAG Heuer suprisingly (or maybe not) saw peaks of engagement linked to vintage Heuer collections: “These two Vintage Carrera from the 60’s are so contemporary! Do you love them?” and “Discover this beautiful timepiece: Heuer 1950” are the two posts that generated the highest peaks of interaction in 2012, respectively of 2.23% and 2.12% engagement. Of note is Omega’s relative lag on the social media platform (18th most popular brand in Facebook) compared with its domination in consumer brand interest worldwide (2nd in the WorldWatchReport™ global brand ranking), a symptom that can be observed for several Swatch Group brands in other categories. 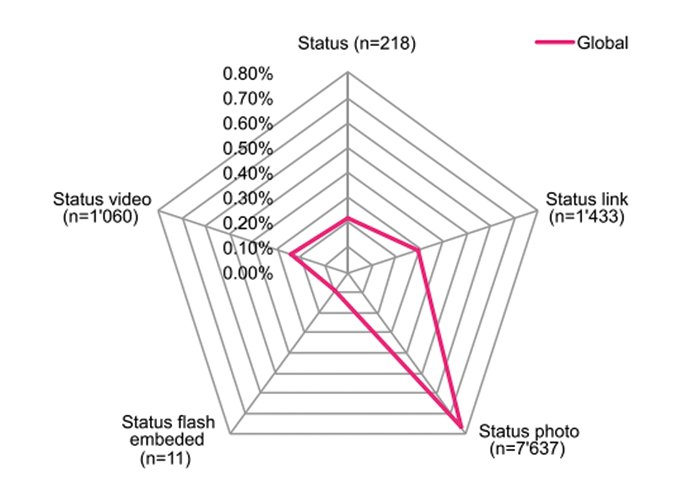 What then are some ways for brands to maximise chances of not only attracting new fans but also increasing interaction? A new indicator in this year’s WorldWatchReport™ is the analysis of the most engaging content type and post timing for luxury watch brands on Facebook, highlighting when and how luxury clients are engaging the most on the platform. Among all brand posts between January and December 2012 – 10,360 total – photos is not only the most commonly used content type by watch brands on Facebook (73% of total posts) but also the one generating the highest average engagement (0.40%). High definition watch pictures are definitely triggering the majority of brands’ interactivity with Facebook users. Surprisingly, video postings (10% of total) are slightly less engaging (0.22%) than link sharing (0.29%, 13% of total posts). Of note, Carl F. Bucherer is the only brand to have created (once) a Facebook “Offer” – a paid feature to promote discounts exclusively to Facebook users –which reached the highest engagement (1.40%) among other content types. If the usage of actual “discounts” can be questioned for luxury brands, it shows that user motivations go beyond aspiration and that Facebook could become a relevant sales and in-store traffic generator in upcoming years. 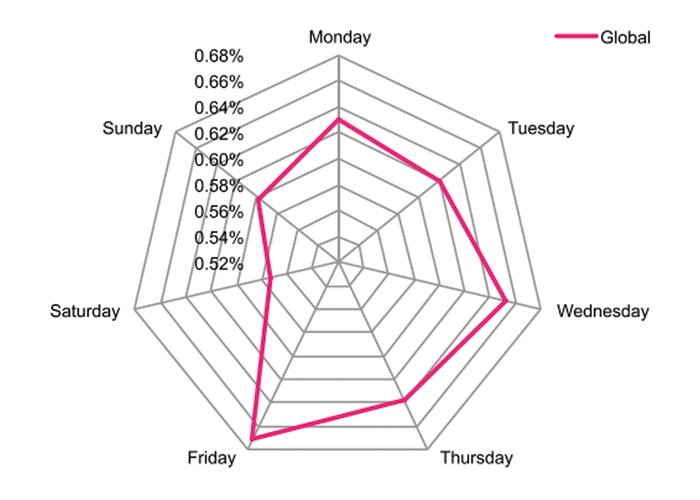 Brands can further increase engagement by posting when Facebook users are most active, as they are not equally responsive depending on days of the week. The report shows that Friday is seeing peaks of activity (0.66% engagement) among business days while weekends are apparently not suited for brand postings with below 0.60% engagement. When diving further into the data by brand category, we see a much contrasted picture with Couture brands actually performing the best during weekends, especially on Sunday. This particular day saw peaks of engagement during the launch of major fashion campaigns from Chanel “The new CHANEL N°5” film, starring Brad Pitt, Dior’s “J’adore Le Parfum – The Film”, Louis Vuitton’s “L’Invitation au Voyage” behind the scene film shoot. Weekends are opportunities for watch brands to generate additional engagement as demonstrated by Couture brands. More diversified content which goes beyond products might bring additional resonance to users while they are off.