WORLDWATCHWEB™ - BUSINESS / The Most Popular Watch Executives on the Web


WORLDWATCHWEB™ - BUSINESS / The Most Popular Watch Executives on the Web

Leadership. It is perhaps one of the most-important yet least-discussed aspects of luxury brand management. Corporate culture has long been cited as a source of business success or failure, yet the luxury industry remains largely silent on the internal strategies that keep its best-known brands moving forward.

Consider for one moment, the impact that a sole individual has had on the luxury industry, Bernard Arnault. Whether one chooses to admire or admonish his aggressive approach, his influence is undeniable. He has effectively revolutionised the way that luxury brands are organised, marketed and sold, and the way in which luxury is understood.

Most of all, he has created ‘star’ executives, ‘star’ designers and ‘star’ brands. Such senior luxury executives are photographed on the red carpet as just as often as they are found in the boardroom. Stars in their own right, they move from brand to brand in a dizzying display of executive musical chairs. It is a game the watch industry is becoming quite good at.

Bernard Arnault has revolutionised the way that luxury brands are organised, marketed and sold.

In 2014 alone, Stephane Linder exited Tag Heuer after a career with the brand spanning 21 years. Jean Frederic Dufour was confirmed as the new CEO of Rolex - its third since 2008 - having served as CEO of Zenith since 2009. Jean-Claude Biver returned to LVMH, appointed in the newly created role of Head of Watches, overseeing Zenith, Tag Heuer and his beloved Hublot. Luc Perramond moved more quietly from La Montre Hermès to Ralph Lauren Watches. Michele Sofisti stepped down as the CEO of Sowind Group, and eventually as CEO of Gucci Timepieces & Jewellery. Former Montres Corum CEO Antonio Calce has recently been named to succeed Sofisti at Sowind Group, at the same time that Christophe Arteaux was named CEO of Qeelin. This reshuffle follows the creation of Kering’s first Luxury – Watches and Jewelry division, and the appointment of Albert Bensoussan as its first CEO. The leaders of Boucheron, Girard-Perregaux, JeanRichard, Pomellato, Dodo, Qeelin and Ulysse Nardin now report directly to the former LVMH Group executive and industry consultant.

TOP CEOs BY INDUSTRY In September 2014 Thierry Andretta moved from CEO to Vice President at Buccellati, whilst also taking on Board of Director responsibilities at Mulberry. Former Gucci executive Gianluca Brozzetti was named as his successor, having served as executive director of the jewellery and watch division at Bulgari.

After ten years at Louis Vuitton, Jean-Marc Mansvelt has taken over CEO duties as Chaumet, effective January 2015. The industry still awaits an official announcement from La Montre Hermès as to who will lead the ambitious French brand into the future. And we haven’t yet made it to Baselworld, where no doubt a new a stream of leadership announcements will be made.

Whilst the need for creativity and innovation is undeniable in luxury, with rapidly changing business conditions, intense competition and frequent economic headwinds, the role of the CEO has never been so important. As the watch industry continues to consolidate, turning privately-owned brands into stock-market stalwarts, growth and performance has never been more important. Consider this: 2014 gross sales for the Swatch Group exceeded CHF 9 billion for the first time ever, an increase of 4.6% over the previous year, despite the negative impact of the Swiss franc’s exchange rate. Operating profit clocked in at CHF 1.75 billion. The watch industry is therefore increasingly becoming the stock market option to watch, as consumers tire of purchasing entry-level monogrammed handbags. In a trading update issued this January, Richemont claimed that weak luxury watch demand in Hong Kong and Macau made sales growth ground to a halt in the final quarter of 2014. Despite slowed growth during the quarter, the group reported third-quarter revenue to the tune of 2.94 billion euros. LVMH’s Watch and Jewellery division reported relatively flat revenue growth of 3% during 2014, but it remains one of their most stable sources of income, netting over 2.5 billion euros in revenue for the group. Their Wines & Spirits division revenues dropped by 5% as Fashion & Accessories advanced 10%.

And as their conglomerates consistently report profits in the billions, their leaders inevitably feature - rather prominently - on the world’s wealth rankings. Bernard Arnault is a tabloid favourite, as the richest man in France, and the 15th richest person in the world with a net worth over $35 billion. (Forbes Billionaires 2014) Francois Pinault and family rank 60th on the very same list (net worth $15.1 billion), followed by Alain and Gerard Wertheimer at #132 (net worth $9.5 billion), Giorgio Armani at #181 ($7.3 billion) and Ralph Lauren at #194 (net worth $6.9 billion). Richemont CEO Johann Rupert has an estimated net worth of $7 billion. As a result, the leaders of watch and jewellery brands are inevitably on the radars of an increasing number of people: financial analysts, competitors, the global business press and even the general public. And according to Digital Luxury Group’s DemandTracker technology, the watch industry executive who garnered the most search interest in 2014 was Jean-Claude Biver.

Bernard Arnault is a tabloid favourite, as the 15th richest person in the world

Aside from the fact that Jean-Claude Biver remains one of the most quotable watch executives of all time, his comments on the Apple Watch in 2014 no doubt played an important part in the 45% increase in online interest compared with 2013. As did his announcement that Tag Heuer will move into the Smartwatch market in 2015. The executive was quoted telling Forbes that Apple’s debut smartwatch ‘lacked soul’ and ‘aesthetic tension’ and ‘is not sexy at all’. Explaining to reporters he said that “this watch has no sex appeal. It’s too feminine and looks too much like the smartwatches already on the market. To be totally honest, it looks like it was designed by a student in their first trimester,” added Mr Biver. His appointment at LVMH after his 2013 retirement from Hublot no doubt also contributed to his rising popularity. And one can only expect this interest to grow in 2015, given the announcement of Cara Delevigne as Tag Heuer ambassador during his service as Interim CEO. The impending launch of their smartwatch will undoubtably extent his capacity to comment on behalf of LVMH.

Jérôme Lambert, CEO of Montblanc, ranks as the second most-searched for watch industry executive in 2014. Overall it was a momentous year for the brand, as the 11-year veteran of Jaeger-LeCoultre breathed new life into the manufacturer of writing instruments, leatherwoods and timepieces. The unveiling of a Perpetual Calendar for under 15,000 Swiss Francs marked his definitive arrival in 2014. On January 1st 2015 the brand again garnered headlines with the launch of the Montblanc Timewalker e-Strap watch line, which connects to Android and iOS using low energy Bluetooth to signal notifications and track activity. The more recent appointment of Charlotte Casiraghi as Global Brand Ambassador will continue to push Montblanc further into the future. Juan Carlos Torres, CEO of Vacheron Constantin, was the third most-searched watch industry CEO of 2014. 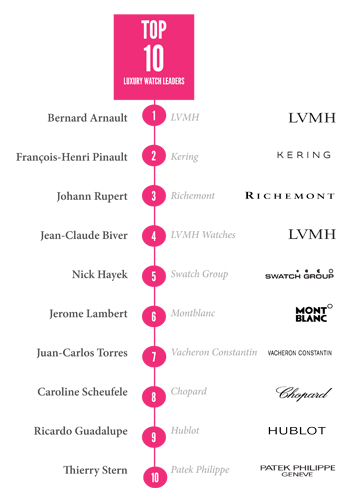 FASTEST MOVERS Aside from Jean-Claude Biver, who was the most-searched watch executive, as well as the executive who registered the biggest increase in search traffic volume year-on-year (45%), interest in Georges Kern, CEO of IWC, grew fastest at 42%. Without scandal or billionaire listing, one can attribute the increase to the overall momentum maintained by the brand in 2014. The executive who registered the third largest increase was Thierry Stern, up 26%. The outspoken CEO of Patek Phillipe created huge buzz around Baselworld 2014, remarking to the Swiss Press that the brand could be forced to move its headquarters away from Geneva or to sell up because of “high taxes”. The leader of the family-owned watchmaker was also identified as a billionaire in 2014, with Forbes estimating his net worth around $3 billion. Patek Philippe also celebrated its 175th Anniversary, celebrating with some of the world’s most rare and accomplished pieces of haute horlogerie.

What do all these executives have in common? For one thing, all of their brands are well sold and understood in the marketplace. Each has a distinctive vision, identity and consumer base. Jean-Claude Biver is widely credited with resuscitating Hublot with his unwavering vision, creating a specific niche for an even more specific clientele of next-generation ultra high net worth individuals. With the exception of Patek Philippe, each of the brands with the most-searched CEOs are inherently digital. Leading the way in terms of online campaigns, branded content, social media activities, video, mobile and SEO. In some cases, these brands are beginning to bridge the gap between the digital and the physical.

Baselworld is fast approaching, and CEOs face no shortage of pricing dilemmas given the recent controversy surrounding the Swiss Franc. At Davos, Oxfam made headlines claiming that half of global wealth is now held by the wealthiest 1%, just as the Richemont Group opened doors to present its most innovative (and expensive creations) at SIHH in Geneva. 2015 will present itself as another challenging year in watchmaking, as luxury continues to transcend its position as an industry. Today luxury is of key fiscal, ethical and political concern, and watches that can sell for anywhere between €1000 and €100,000 will continue to draw attention from all corners. Brand leaders will be faced with difficult political environments in key growth markets, a public increasingly aware of the haves and the have-nots, and uncontrollable currency fluctuations that directly impact revenues. All the while they will be expected by shareholders to continue growth and maximise profitability.