Every year at the occasion of the Salon International de la Haute Horlogerie (SIHH), Digital Luxury Group unveils the results of the haute horlogerie category (18 brands) of the WorldWatchReport™, the leading market research in the luxury watch industry published in partnership with Europa Star, and the gracious support of the Fondation de la Haute Horlogerie.

The full edition of the report, which this year will cover 60+ brands in 20 markets worldwide, will be available in April at the time of Baselworld.

Compared to the previous year, the highest-end category of luxury watches, Haute horlogerie, experienced a 7 per cent increase in brand interest. “This marks the third year in a row that the online interest of this highest-end segment of luxury watches has increased, showing the continued strength of haute horlogerie within the overall market,” indicates Florent Bondoux, Head of Strategy & Intelligence.

Of the 20 markets analyzed in the study, nearly half (47 per cent) of global interest for haute horlogerie stems from in-the-spotlight markets Brazil, Russia, India, China, Singapore, Thailand, Hong Kong, and Taiwan. Mainland China on its own compromises 31 per cent of the global demand or twice as much as the US market, increasing by 27 per cent.

3. Consumer interest for haute horlogerie in mature markets, US and Japan, declining

A downward trend was observed in the weight that mature luxury watch markets the US (down by 10.6 per cent) and Japan (down by 11.7 per cent) represent in the global breakdown.

While relative share of demand has progressively shrank in the past 3 years in most established markets, for the first time since the report’s launch in 2004, an absolute decline in domestic demand in the US and Japan is observed.

“2012 has been a year of stabilization in the U.S. Affluents have been focused on the Presidential campaign and the tax hikes surrounding the fiscal cliff. Tourist shopping, notably from Latin America, should offset domestic demand slowdowns and represent a major growth driver in the region,” explains David Sadigh, Founder & CEO.

Patek Philippe remains and by far the leading haute horlogerie watch brand with 23.6 per cent of brand interest share. Jaeger-LeCoultre takes the second spot with 12.7 per cent, closely followed by Vacheron Constantin at 12.6 per cent, Audemars Piguet at 9.2 per cent per cent and Breguet at 7.7 per cent.

Along with Richard Mille (see below), Vacheron Constantin and Patek Philippe also record the highest growth rates in brand interest year-over-year, with 26 per cent and 10.2 per cent growth, respectively. 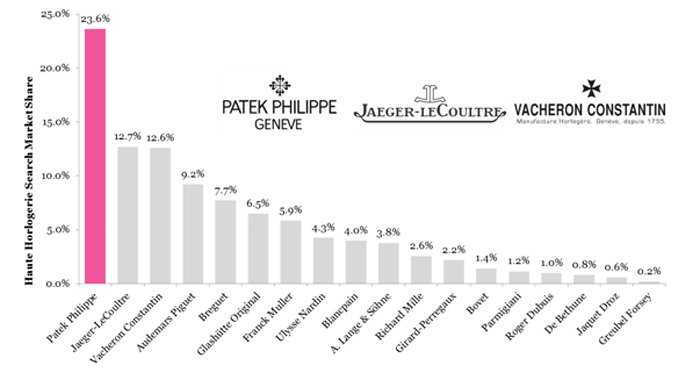 The most popular haute horlogerie brands in 2012

Founded in 2001, the brand Richard Mille is the fastest growing haute horlogerie brand (+61 per cent over last year), followed by Vacheron Constantin (+26 per cent), and Patek Philippe (+10.2 per cent). “Assuming Richard Mille manages to keep its momentum and growth rate, the company could easily become one of the top 5 haute horlogerie brands by 2020,” predicts Bondoux. “This is a brand with a strong breadth of exclusive products and an equally strong PR-driven marketing approach focused on events and celebrity endorsements. Richard Mille is a brand to watch.”

The Royal Oak, reinforcing its leading position of last year, continues its reign as the most sought-after haute horlogerie watch model, increasing its online interest by 5 per cent over the last year, likely an effect of the increased communications surrounding the icon’s 40th anniversary. Though the Royal Oak leads globally, local preferences arise for other models in markets such as Japan (Girard-Perregaux’s 1945), China (Vacheron Constantin’s Overseas), and Russia (Blancpain’s Leman). 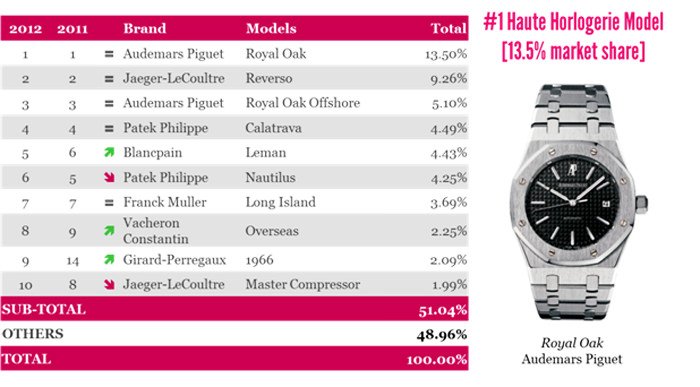 Further Haute horlogerie insights are available in the WorldWatchReport™ Haute Horlogerie Preview, see the PDF at the bottom of this article.

About the 2013 WorldWatchReport™The 2013 WorldWatchReport™ measures and benchmarks over fifty unique indicators to analyze the performance of 60+ luxury watch brands across 20 international markets. The report identifies and analyzes over 1 billion watch-related search queries typed into major global search engines and translates them into the client preferences driving the industry. It has been published since 2004 by Digital Luxury Group in partnership with Europa Star and the gracious support of the Fondation de la Haute Horlogerie. For more information about the WorldWatchReport™, please visit http://www.worldwatchreport.com.

About Digital Luxury GroupWith offices in New York, Geneva, and Shanghai, Digital Luxury Group (DLG) is the first international company dedicated exclusively to luxury industry market intelligence as well as the design and implementation of digital communication strategies for the luxury brands.