The preview of the Haute Horlogerie section of the WorldWatchReportTM 2014, which was presented by Europa Star’s Digital Partner, Digital Luxury Group, at this year’s SIHH and covers 18 brands, confirms that interest in high-end watchmaking remains healthy, with 12 per cent growth in the online interest for high-end watch brands, continued strong interest in China (despite decreasing sales) and signs of recovery in the US and UK.

Patek Philippe consolidates its leadership in the segment, while Glashütte Original and Vacheron Constantin showed the biggest year-on-year improvements, with Richard Mille failing to capitalise on its astonishing 61 per cent growth last year.

1. Haute Horlogerie brands continue to grow rapidly (+12 per cent). Interest in Haute Horlogerie is here to stay. The highest-end category of luxury watches experienced double-digit growth in global interest. “This marks the fourth year in a row that we’ve observed the category increasing in the WorldWatchReportTM, showing the continued strength of Haute Horlogerie within the overall market.” Comments David Sadigh, Founder & CEO at Digital Luxury Group.

2. Despite decreasing sales in the mainland, interest for luxury watches still booming in China. Chinese consumers showed the strongest global interest for Haute Horlogerie with a 57.9 per cent increase versus last year, accounting for over 30 per cent of total interest in the segment. According to David Sadigh, Founder & CEO at Digital Luxury Group: “Despite lower reported sales in the mainland, Chinese consumers’ interest for Haute Horlogerie watches continues to grow. This love story is not ready to end anytime soon and will continue to drive a substantial amount of sales outside of China.”

4. Patek Philippe consolidates leadership of the Haute Horlogerie segment. Patek Philippe remains by far the leading Haute Horlogerie watch brand with 28.1 per cent of brand interest share, growing an impressive 21.4 per cent since last year. Not to be dismissed, Vacheron Constantin in 2nd place this year and Audemars Piguet in 3rd position. It’s a tight race at the top - both brands having very close market shares (13.4 per cent and 13.0 per cent respectively). 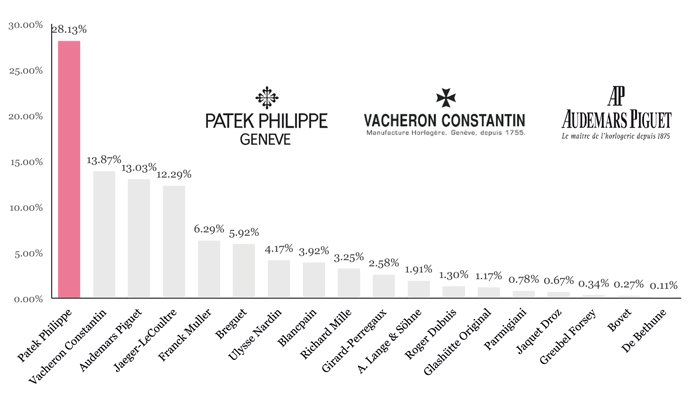 The most popular haute horlogerie brands in 2013

5. Interest in last year’s rising star Richard Mille slows down (-2% vs. +61% the previous year). Last year’s fastest-growing Haute Horlogerie brand, Richard Mille, which saw an impressive 61 per cent growth at the time, sees signs of a slowdown in interest experiencing a 2.7 per cent decrease. Swatch Group brand Glashütte Original was the fastest-growing in the category this year, with +40.2 per cent. Amongst the bigger brands, Vacheron Constantin displayed solid growth increasing by 33.9 per cent.

6. Glashütte Original and Vacheron Constantin, which had strongest year-to-year evolution, also showed the strongest rise in interest in forums. Among the Top 10 most popular Haute Horlogerie brands on selected watch forums (PuristSPro, TimeZone and iWatch365), Vacheron Constantin showed the strongest increase in interest, up 53.4 per cent in total number of views, followed by Glashütte Original (+48.7 per cent).

Haute Horlogerie brands tracked in the preview report: A. Lange & Söhne, Audemars Piguet, Blancpain, Bovet, Breguet, De Bethune, Franck Muller, Girard-Perregaux, Glashütte Original, Greubel Forsey, Jaeger-LeCoultre, Jaquet Droz, Parmigiani, Patek Philippe, Richard Mille, Roger Dubuis, Ulysse Nardin, Vacheron Constantin. Brands which belong to other categories, exhibiting at the Salon International de la Haute Horlogerie (such as Cartier, IWC, Panerai, and Piaget) have not been analysed in this year’s Haute Horlogerie preview research but are included in the full WorldWatchReportTM 2014, results of which will be released in March at the time of BaselWorld. 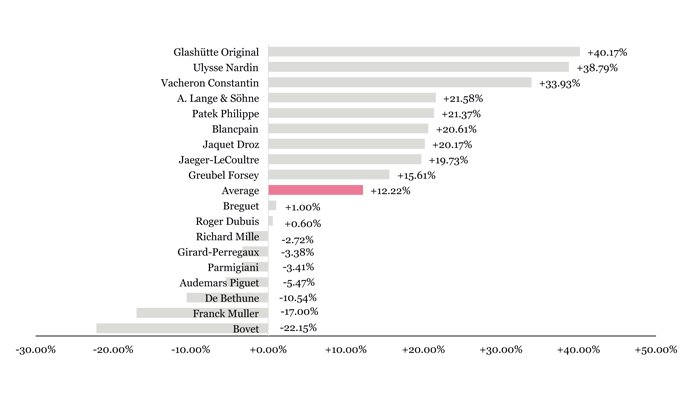 The full edition of the WorldWatchReportTM 2014, covering 60+ brands in 20 markets worldwide, will be available in March at BaselWorld.