Swatch shop in Oxford Street
The façade of the Rolex building in London.


After-sales service and repairs
After-sales service and repairs are constantly being improved in the UK, as Swiss-owned and other distributors see the value of having facilities here, as an alternative to shipping watches back to their homes, with all the risks involved. This is why Breitling, for example, has just opened a purpose-built service and repair centre in Tunbridge Wells, Kent, why Cartier has the same in Bond Street, why Patek Philippe has seven Geneva-trained watchmakers in their UK headquarters in Buckinghamshire, why Rolex employ nearly 100 staff in Kent (and a few in London as well) to undertake these essential functions, and why the Swatch Group has 18 trained watchmakers at its service centre in Lancashire. They save customers having to hear the words they fear, on the grounds of delay and extra cost: “Well, this watch will have to go back to the Swiss factory…” Also, around the country there are probably over 100 self-employed watch repairers, and most will have British Horological Institute qualifications.
Matthew Cundy, who not so long ago ran Baume & Mercier in the UK, looks after the Hublot brand here and parts of the Americas. He also finds time to guide the fortunes of Kismet Mentoring, which offers watch wholesaling and retailing courses.
At street level, the shoe repair chain Timpsons offers basic watch repairs, battery replacements etc. through its hundreds of outlets.


Auction and Rolex
Rolex consistently appears at the top of the results lists from the top auctioneers. Nothing seems to harm the standing of this brand! In 2003, these saleroom results were obtained (prices include buyers’ premiums): Bonhams (now incorporating Phillips in the UK), £2,346,956; Christie’s, £2,616,629; Sotheby’s, £3,724,000 – giving a grand total of £8,687,585. Sotheby’s has recently moved its watch and jewellery saleroom from Olympia, slightly out of town, back to its New Bond Street premises. Very sensible. Between sales Rolex fanciers can always satisfy their needs by a call at The Vintage Watch Company. The Managing Director of this shop, off Piccadilly in Burlington Arcade, John Silver, states: “Our unique display of only vintage Rolex wristwatches in a modern retail setting makes us, we believe, the only such shop in the world. Currently over 400 Rolex models are on display.” One small but important comment. In the UK, it is illegal to trade in counterfeit watches, but not to own one!
In a neighbouring arcade to the south of Piccadilly resides George Somlo’s well-known small emporium, which is however brilliantly stocked with a very wide range of ‘previously-owned’ famous models. Down in the Strand Austin Kaye always has a wide range of less expensive examples of famous makes.
Unwelcome added publicity has also been occurring in the newspapers, with a recent spate of so-called ‘Rolex robberies’. A horrible thought, but, as in the counterfeit world, this is a back-handed compliment.
And to think that Rolex was founded in London! 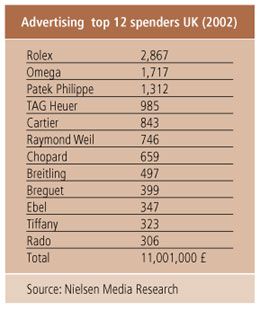 
NEXT...
In the forthcoming weeks, there will be a new Special Market Focus on China serialized online.