Anyone who has travelled to Geneva for the SIHH or another watch-related event will have noticed them. Appearing as early as the 1930s and prized by watch brands, the illuminated logos on the roofs around the lake have entered the collective imagination. Advertising agency Force Promotion, which manages some fifteen of them, has even recently introduced a digital system that allows watchmakers to control the lighting of their logo remotely. We wanted to find out more.

Anyone who has travelled to Geneva for the SIHH or another watch-related event will have noticed them. Appearing as early as the 1930s and prized by watch brands, the illuminated logos on the roofs around the lake have entered the collective imagination. Advertising agency Force Promotion, which manages some fifteen of them, has even recently introduced a digital system that allows watchmakers to control the lighting of their logo remotely. We wanted to find out more.
E

ven unconsciously, one cannot escape their grip when visiting Geneva. Aside from the ads at the airport, they will probably be your first encounter with the horological facet of the global capital of watchmaking. Like the Jet d’Eau, the luminous logos on the rooftops overlooking the lake are part of the identity of the city’s waterfront, “La Rade”, so much so that without them, it wouldn’t have quite the same atmosphere at nightfall. Appearing as early as the 1930s, these signs have entered the collective imagination of Geneva.

Richard Mille has three of them. Rolex has two (one on each side of the Mont-Blanc bridge), as does Cartier. Patek Philippe, Chopard, Blancpain, Breitling, Baume & Mercier, Zenith, Bovet, Breguet, Hublot, Tudor, Tissot, Piaget, Jacob & Co, TAG Heuer and Vacheron Constantin also display their names on this prominent stage by the lake shore.

Some fifteen of these illuminated signs are managed by a family-owned company: Force Promotion. The company was founded by Daniel Berset around thirty years ago, and specialises in “prestigious illuminated advertising” in Geneva. The company seeks to give this rather conservative city a little bit of the incandescent glamour of Hong Kong or Las Vegas – within reason...

Richard Mille has three illuminated logos and Rolex has two (one on each side of the Mont-Blanc bridge), as does Cartier. Patek Philippe, Chopard and Blancpain also display their names on this prominent lakeside stage. 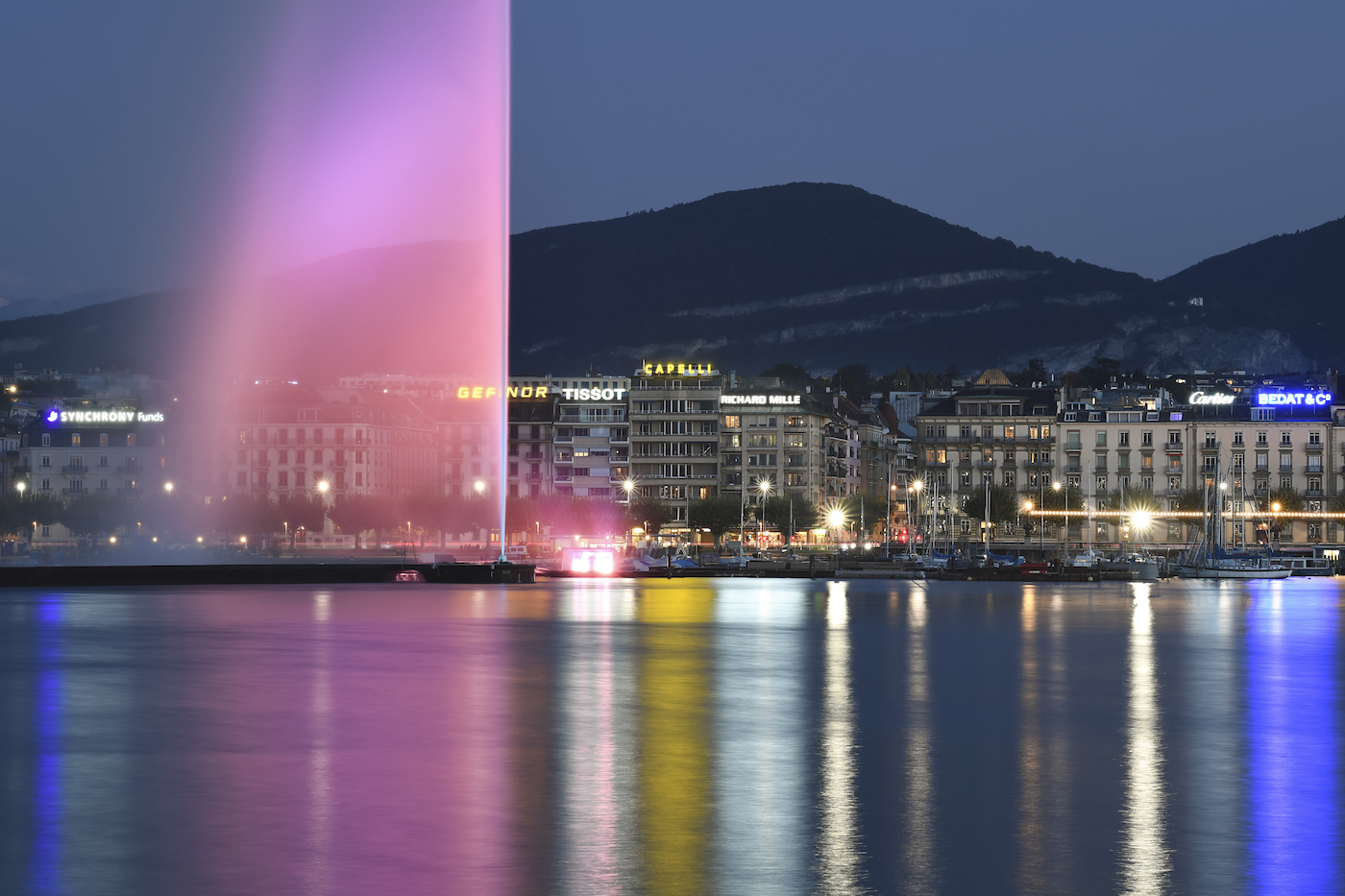 A visual introduction for watch companies

“Our company started with classic advertising on local radio and television, as well as in the sports world, before moving on to illuminated roof signs,” says Julie Schillaci, communications manager at Force Promotion. The company saw this as an interesting niche, providing them with the opportunity to professionalise the system as an intermediary. Before their arrival, either the brands would have their offices in the building or, in most cases, they would negotiate directly with the building’s owner.

Watch and jewellery brands are Force Promotion’s main clients, ahead of banking and real estate companies. In addition to the logos around the lake, the company also manages other locations in the canton (train station, airport), digital displays (Mont-Blanc car park) and “street marketing” (such as taxi-bicycle wrapping). Today, illuminated signs account for 80% of the turnover of the Geneva-based company, which also offers a few locations in Basel and Zurich. 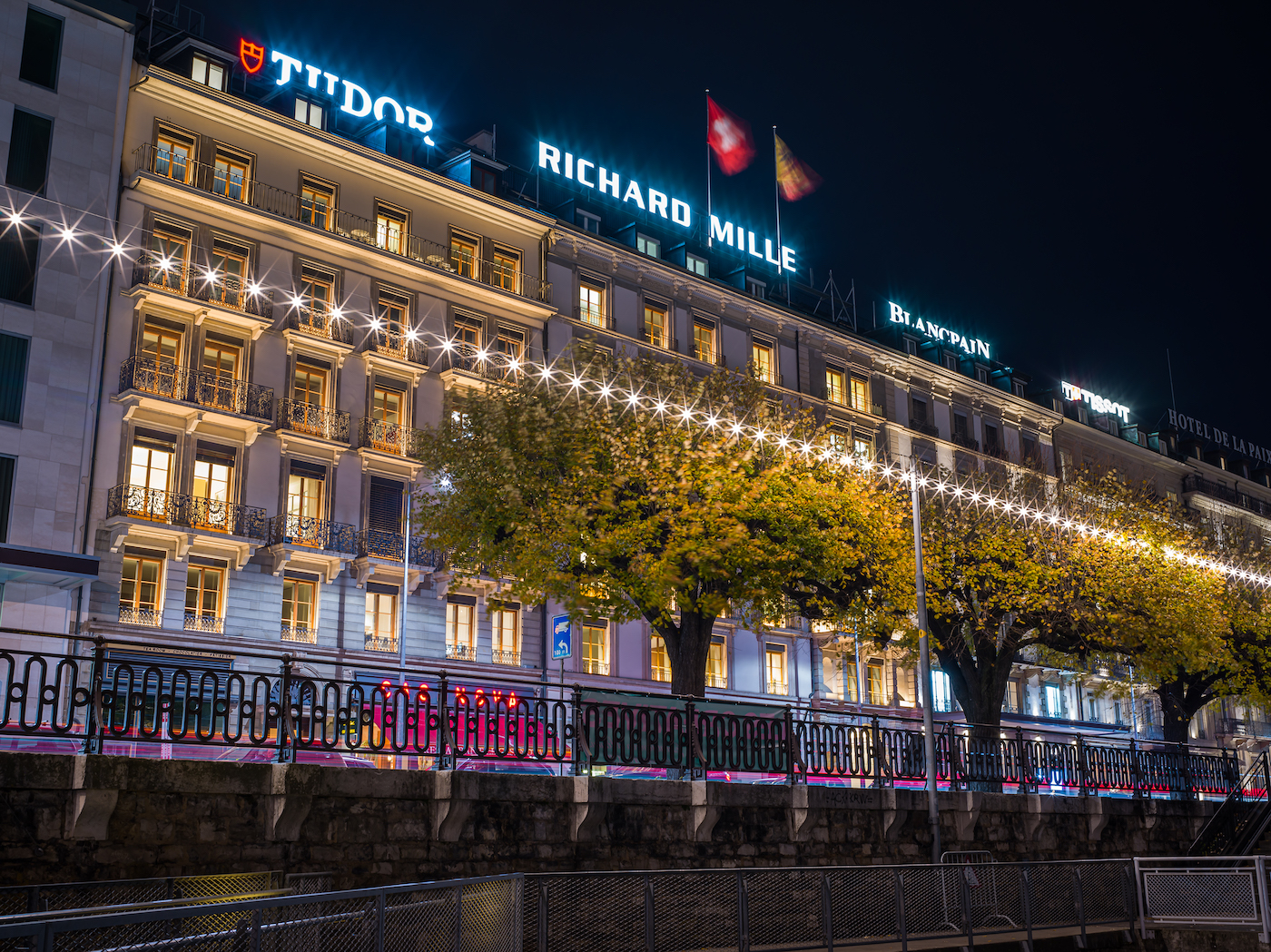 Geneva is not Hong Kong

How do these partnerships work in practice? The contracts are established with the watch brands over the long term (five years on average). Force Promotion manages all the services related to the deployment of the signs, from negotiations with the property owners to their actual installation.

An initial virtual installation of the LED display (which have replaced the old energy-hungry neon tubes) allows the layout to be validated, after which the implementation is entrusted to specialised service providers. According to estimates by RTS in a report on the subject (see here), owners of buildings on the Geneva shorefront receive nearly three million francs in annual income from this activity.

For each new project, an application is submitted to the City of Geneva. The primary consideration is compliance with the legal framework, which ensures both the preservation of heritage and the fight against light pollution, an issue that has come to the forefront in recent years.

Legal restrictions are ever more numerous, whether in terms of the choice of colours available or the size of the letters in the logo.

In fact, there are more and more restrictions, both in terms of the colours available and the size of the letters, whose maximum height is 1.20m around the lake (compared to 1.50m elsewhere in the city). Moreover, a sign cannot be placed on a flat roof, as legally it must not protrude beyond the roof’s silhouette. “Certain practices, such as flashing signs, are authorised in other cities, but remain prohibited in Geneva,” explains Julie Schillaci.

The company advises its clients on critical points such as the visibility of their sign or the spacing of the letters. While some brands are uncompromising when it comes to adapting their logo, others are willing to be more flexible if it means maximising visibility. 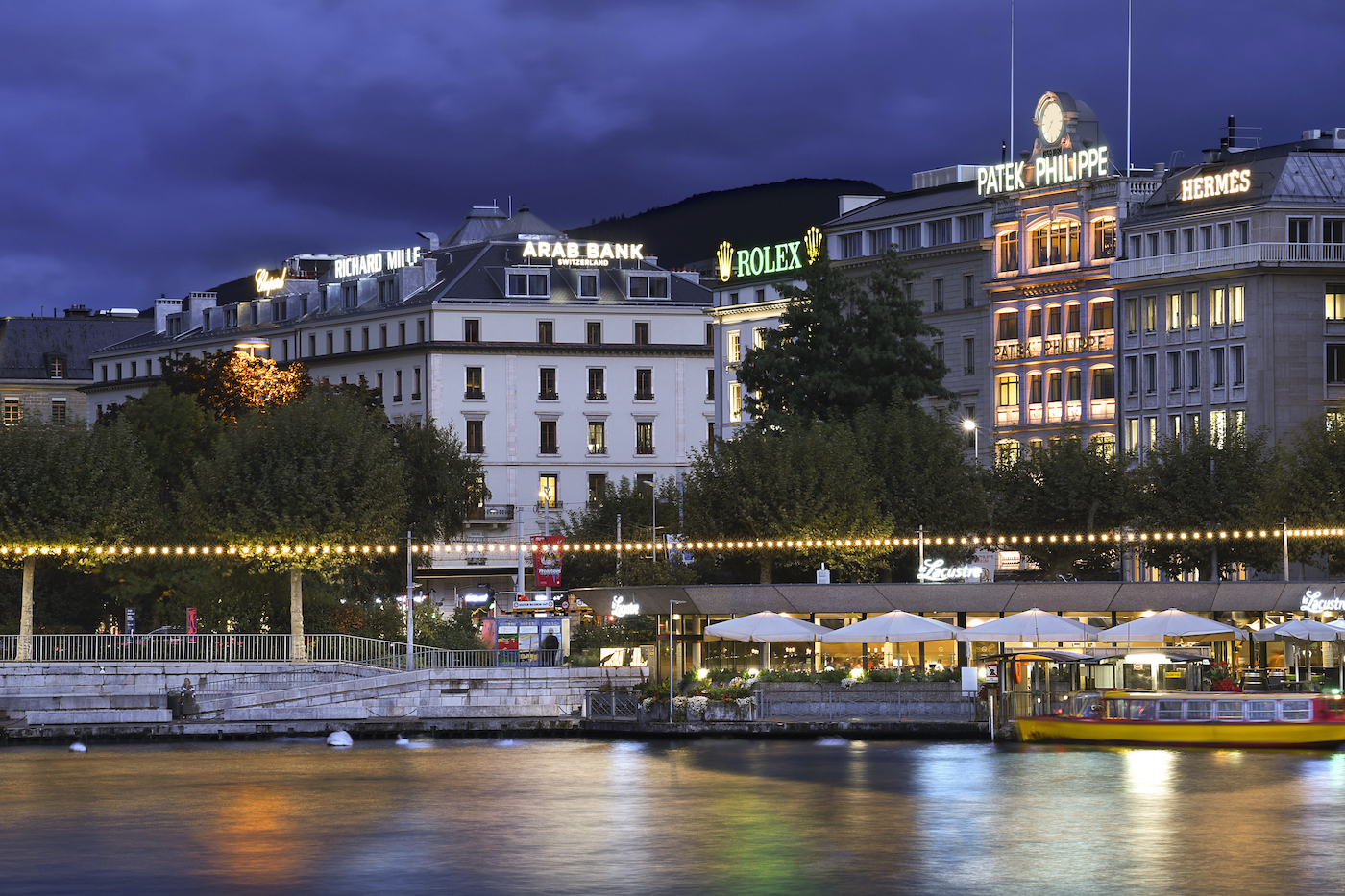 A permanent watch fair in the heart of Geneva

The costs vary greatly: in addition to the technical preparation of the sign, which costs between 20,000 and 25,000 francs on average, rental costs range from 15,000 francs to over 300,000 francs per year for a few exceptional locations. Unsurprisingly, the most popular spaces are located as close as possible to the Mont-Blanc bridge. Force Promotion is also trying to develop new spaces in the canton, opening up its client portfolio to convince the owners of currently “open” roofs.

At the time of writing, the company had several locations available for rent, including one opposite the train station, an “underestimated location with very high potential” according to Julie Schillaci, as well as a highly exclusive space directly in front of the Jet d’Eau. The Covid-19 crisis has reduced brands’ advertising budgets, which explains this unprecedented availability of rare premium locations.

Some watch brands, the more daring among them, have been quick to understand the potential and prestige of this permanent watch fair in the heart of Geneva.

Some watch brands, the more daring among them, understood early on the potential and prestige of this permanent watch fair in the heart of Geneva. This was the case for Richard Mille, which displays a record three logos around the harbour. Force Promotion shared an interesting anecdote: on the agency’s advice, Richard Mille recently switched one of its logos with that of Blancpain, in order to benefit from more space to display its characters. The longer the name, the more expensive the sign… Some clearly have an inbuilt advantage. 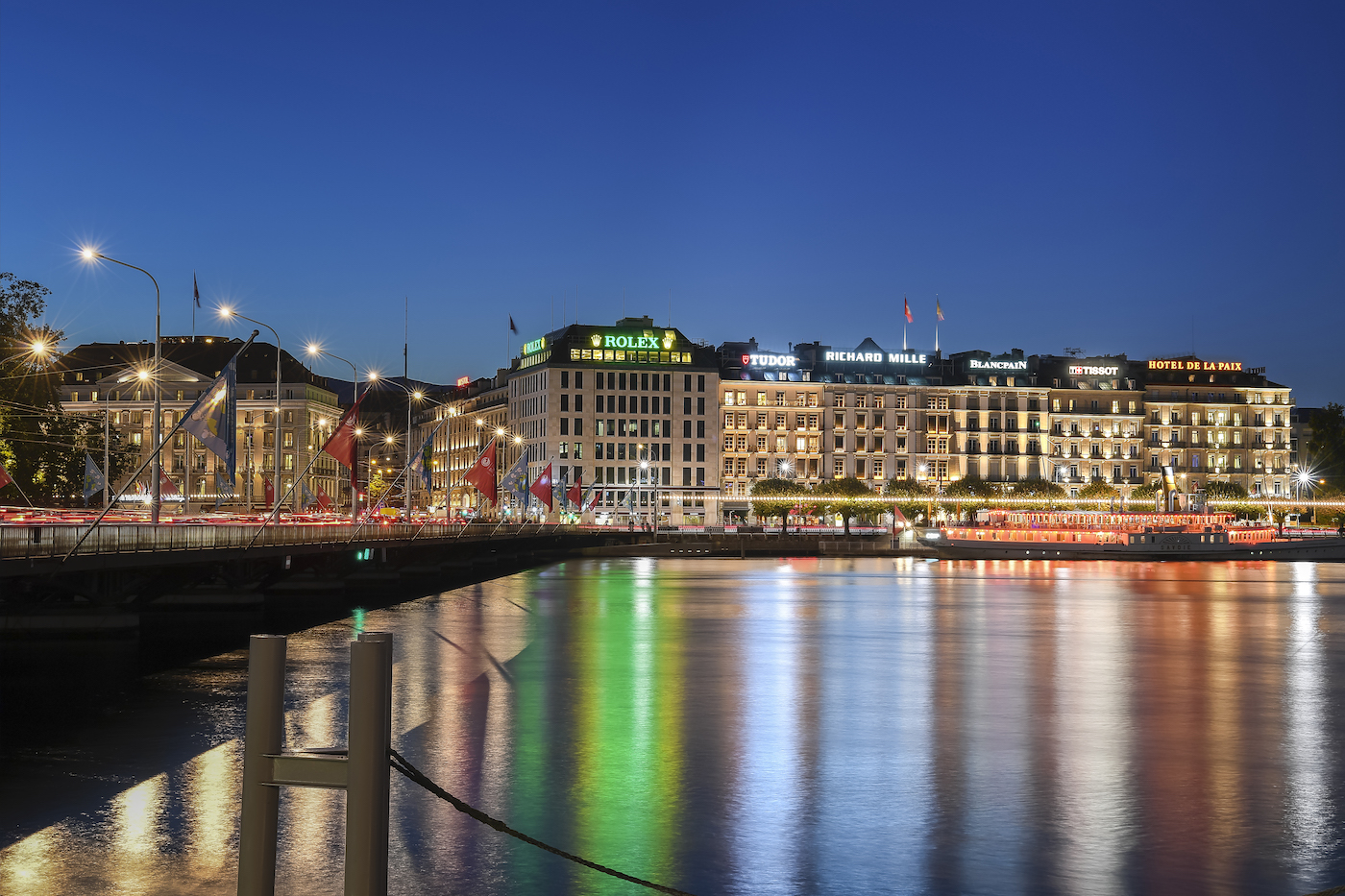 In these times marked by coronavirus and social distancing, Force Promotion is launching an application that allows remote control of illuminated signs, including turning them on and off at will. “Its primary vocation is to enable us to intervene quickly in the event of a breakdown, to be reactive and thus guarantee permanent maintenance,” explains Julie Schillaci. “For our customers too, it’s a unique experience to be able to control their logo in the Geneva bay.

Force Promotion has launched an app that provides remote controls for the illuminated signs, including the ability to switch them on and off at will.

The automation system that controls the signs is automatically adjusted every day, to the minute, to ensure maximum visibility. In addition, the signs are fitted with a twilight sensor that can adjust the electric on/off switch according to the ambient light. This means that if the weather is cloudy and dark, the logos can light up in the middle of the day.

When it comes to making your mark on one of the world’s most famous panoramas, every minute counts, so horological precision is de rigueur.

Super-Retail: the race for global dominance

THE WATCH FILES An increasing number of retailers are moving out of their home markets and successfully establishing themselves in other parts of the world. This (...)