A Tour of the Autumn Watch Fairs
Last November the venerable nations of the Old World hosted three watchmaking fairs targeted at the general public: Munich Time in Germany, SalonQP in London and Belles Montres in Paris. Europa Star was there. Here are our top picks.

The SalonQP welcomed visitors to the Saatchi Gallery in London’s upscale district of Chelsea, with a touch of class and more than a little British eccentricity. Its minimalist rooms, filled with the upper echelons of British society, offered a wide range of luxury watch brands along with a fascinating selection of British companies including Bremont, Garrick, Schofield and Dennison, not forgetting the return of master watchmaker Roger W. Smith, the heir of George Daniels, who marked the exhibition with the launch of four new models. 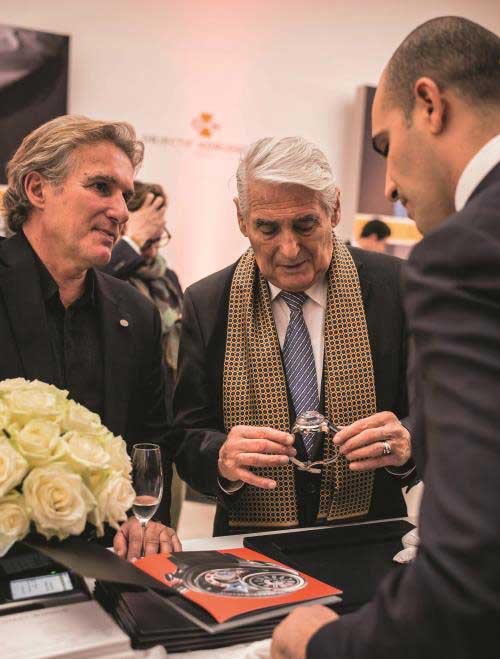 A well-thought-out series of exhibitions and seminars highlighted a variety of different themes. Among them, “Inside a Second” traced the history of the chronograph through important historic watches. “Gems of Time: The Art of Colour” celebrated high jewellery watches. The Grand Prix d’Horlogerie de Genève presented a display of the 2015 winners of watchmaking’s most important awards. And the occasion was honoured with a glimpse of the new Opus 14 by Harry Winston. Show attendance was up 23% on 2014. 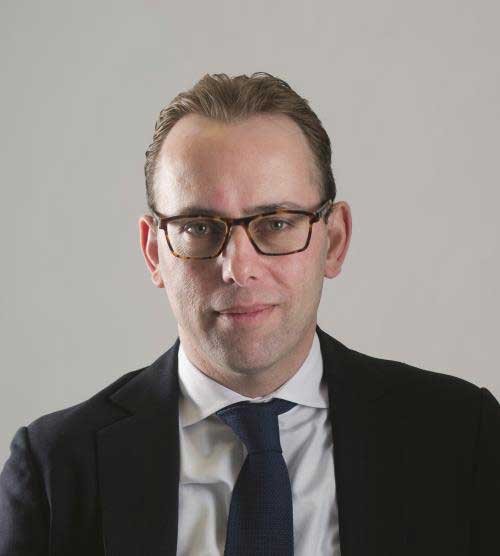 James Gurney, founder of the remarkably successful SalonQP, looks back on the 2015 event. He is particularly proud of the participation of François-Paul Journe, and a tribute to British master watchmaker George Daniels. Interview.

What kinds of people come to your salon?

They have a range of profiles, and the profiles change depending on the day. The opening evening is reserved for brands, collectors, the media, industry leaders and professionals. The second day marks a transition: collectors often come back to have a look at the brands they didn’t have chance to see the night before. The third day attracts a wider audience of watch lovers. 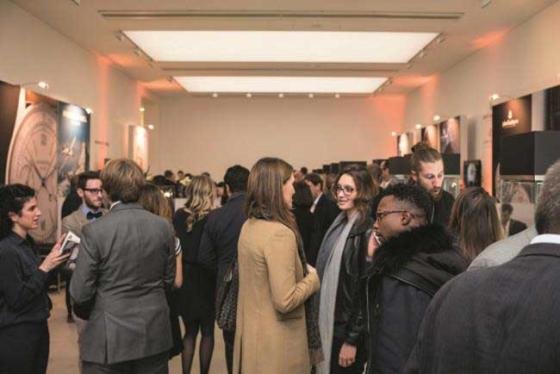 From a strictly watchmaking point of view, what for you were the high points?

Master watchmakers such as Kari Voutilainen, Roger W. Smith and François-Paul Journe were present. The standard of the salon is improving year on year. We also attracted several major brands including Montblanc, along with British manufactures, for whom we represent an important platform. There are also newcomers such as Halda and top designers like Marc Newson. Our salon offers a number of different dimensions, different faces, and the exhibitions and seminars provide added value. From the beginning, our philosophy has been to continue to engage both the brands and the public. Unless you’re a millionaire you rarely have direct access to a brand like Harry Winston, let alone the Opus 14! Could you grow still further, and attract even more brands?

In a way we have reached a limit. We can’t really grow without changing venue, and we don’t want to do that. In terms of style and location there’s nothing to compare with the Saatchi Gallery. The only alternative would be to create a temporary venue, but that’s not really feasible in London in winter!

So do you have to turn a lot of brands away?

It does happen. For example, if a purely fashion brand came to see us, and we didn’t think they were a particularly good fit, we’d have to think twice. But we have had Burberry in the past, and it worked out well, although they only made the one appearance.

What brands do you dream of seeing at SalonQP?

It would be really amazing to have Breguet or Blancpain! We already have the participation of Harry Winston so one day, why not... This year I was delighted to present the last pocket watch produced by George Daniels, the inventor of the coaxial escapement, which was taken up by Omega. It’s an absolutely incredible timepiece, dating from 1994 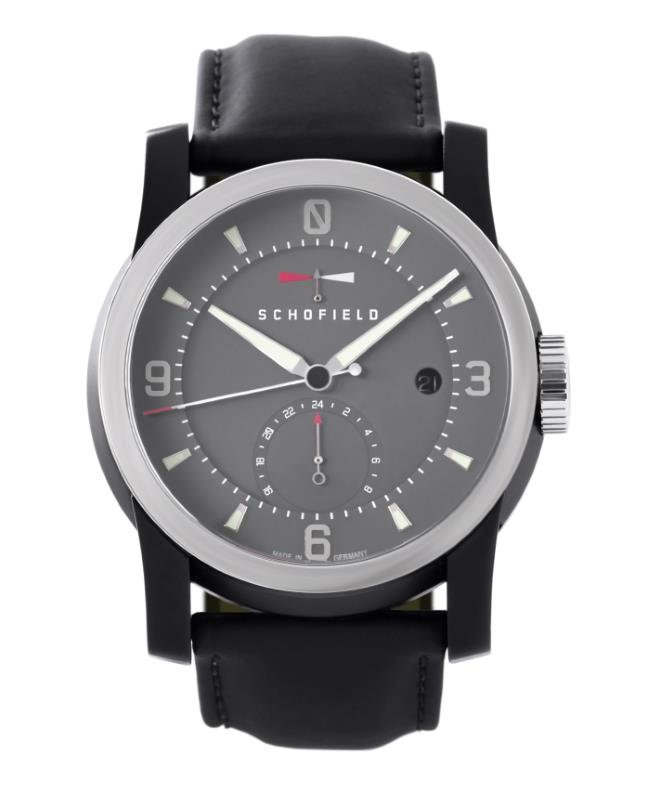 THE BRITISH REVIVAL
Schofield is a British watch company known for its attention to detail and design, under the guidance of creator Giles Ellis. The new Schofield Signalman Silvertop is launched in two dial colours, the style nostalgically harking back to a time when prestige cars were often two-tone, and those early mornings when everyone had milk delivered in glass bottles with silver-foil tops… 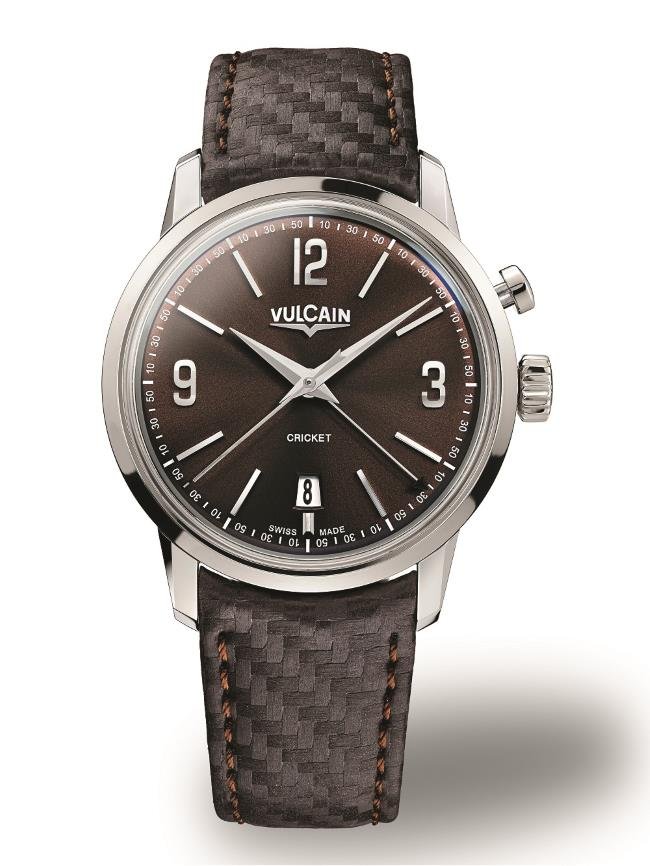 THE CRICKET CHIRPS ON
The brand founded in the Neuchâtel mountains by the Ditisheim brothers in 1858 is today synonymous with their famous mechanical alarm wristwatch equipped with the legendary Cricket calibre – a watch loud enough to actually awaken its owner. Worn by Truman, Eisenhower, Nixon and Johnson, it earned the nickname of “The Presidents’ Watch”. 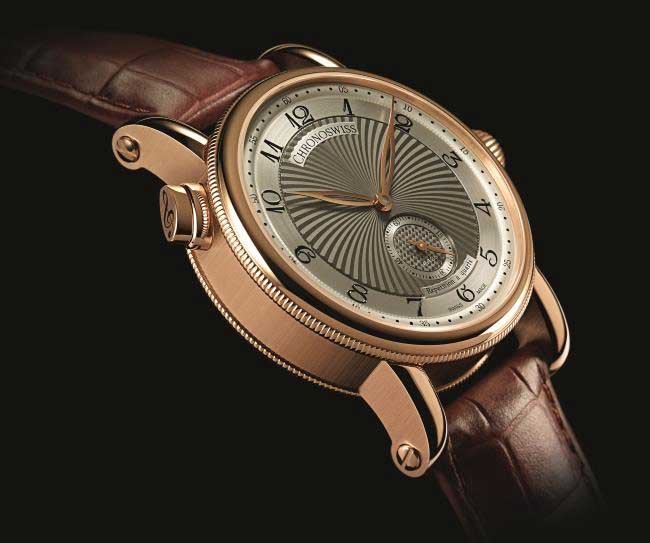 REPEATING THE REPEATER
Lucerne-based Chronoswiss are relaunching their first wristwatch with quarter-hour repeater, introduced in 2003. Having undergone a facelift, the dial is now made from fine silver and decorated with an appealing guilloché design. Art Deco numbers and skeletonised, leaf-shaped hands round off its elegant appearance. A gentle push of the button near the number 10 adorned with a clef is all that’s required to activate the chime. 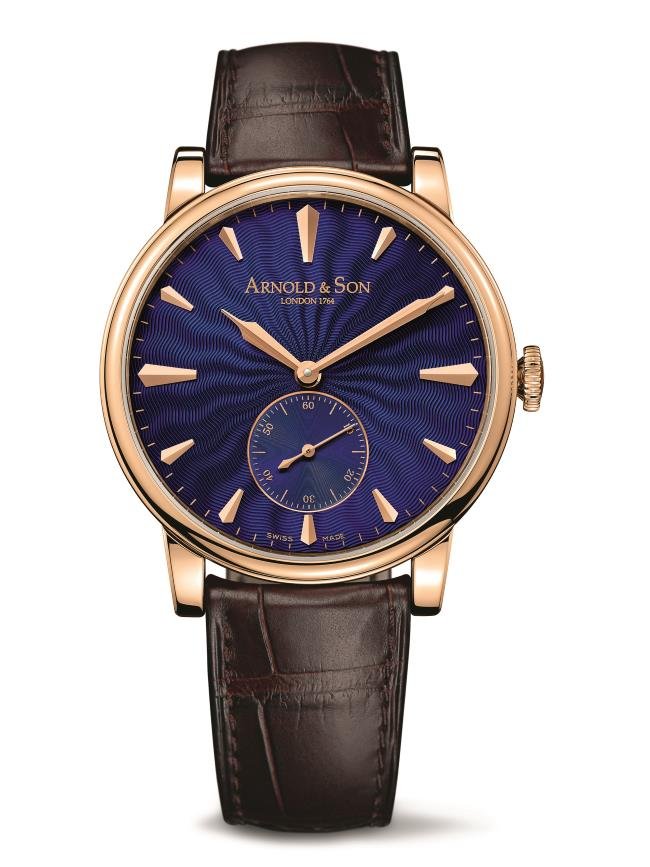 DEEP BLUE
Born in Cornwall in 1736, John Arnold was one of the most inventive watchmakers of his day and held patents for a detent escapement, bimetallic balance and helical balance spring. Finished with an intricate guilloché pattern overlaid by deep blue lacquer, the HMS1 Royal Blue is directly inspired by the timepieces made during the earlier part of John Arnold’s life for King George III and the royal court. It features the in-house A&S1001 calibre. 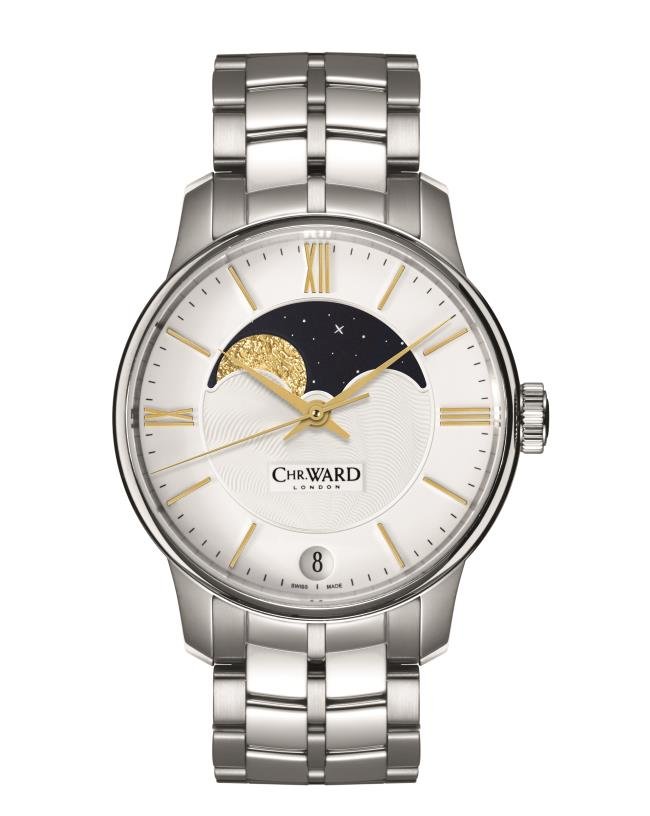 GOES UPMARKET
This British brand, founded in 2004 by Mike France, Chris Ward and Peter Ellis, aims to offer highly accessible Swiss made watches to its aficionados – by engaging in direct internet sales and cutting costs wherever it can. It is now launching its first moonphase watch, the C9 Moonphase, built around the Calibre JJ04 and accurate to within one day every 128 years of the base movement’s accuracy. 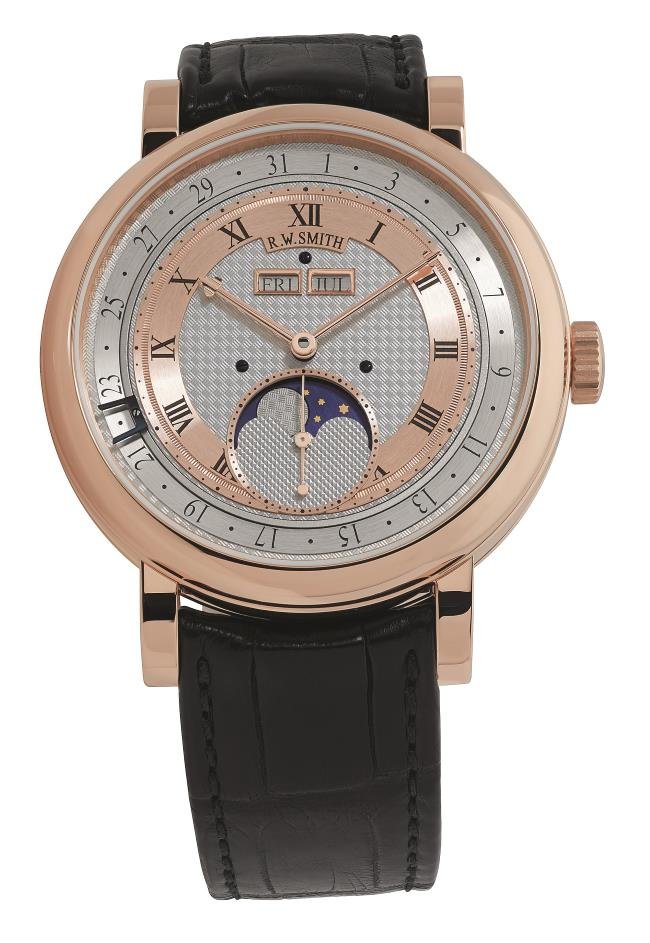 RETURN OF THE KING
With just 80 watches produced since 2001, Britain’s greatest living watchmaker, and heir to the late George Daniels, Roger W. Smith is as rare as he is appreciated… So it was rather an event to see him give a preview of not one but four new watches at SalonQP, in partnership with auction house Phillips. Among them is a star, the new Series 4, an instantaneous triple calendar watch with a highly legible ‘travelling date aperture’. 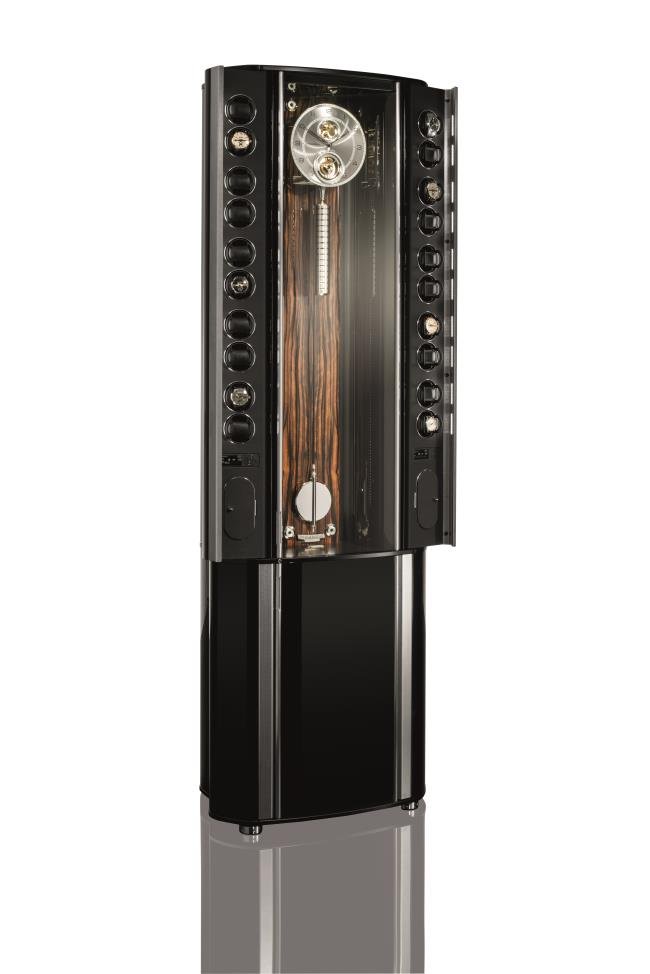 TOWARDS INFINITY
In 2015, Buben & Zörweg, best known for its luxury safes built to house collections of up to 100 fine watches, celebrates two decades in the global luxury business. The brand has also created its own manufacture pendulum movement, the Alpha 01 – Pendulum World Time. To house the new creation, the manufacture produced the Grande Infinity, a tall modern masterpiece with a curved design and central transparent door. 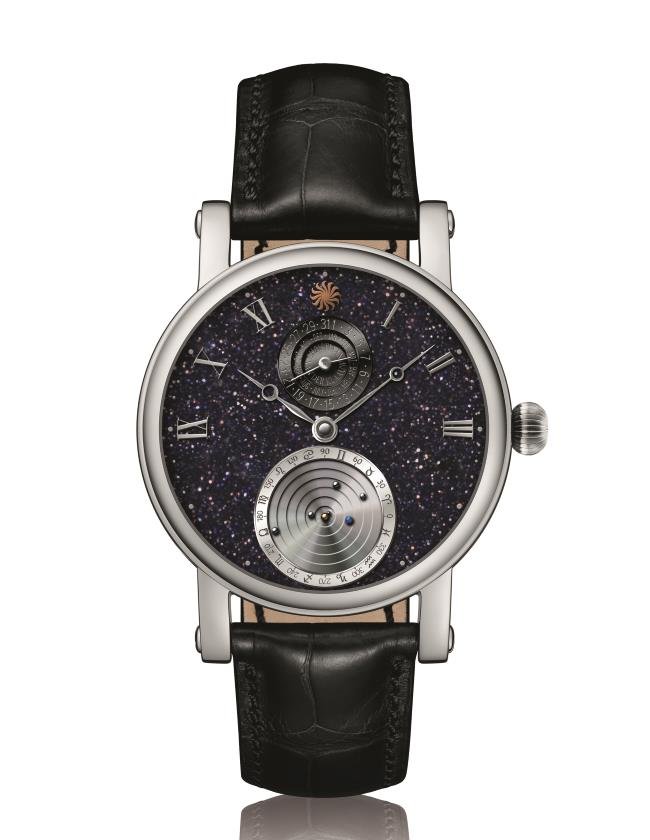 COSMIC WONDERS
Astronomy is the source of inspiration for Dutch watchmaker Christian Van der Klaauw, who presented his first hand-made clock, with astronomical complications, in 1974. Since then the brand has produced mechanical heliocentric masterpieces, from the astonishing CVDK Planetarium – with the smallest mechanical planetarium in the world – to the CVDK Real Moon Joure – with the most accurate 3D moon phase in the world. 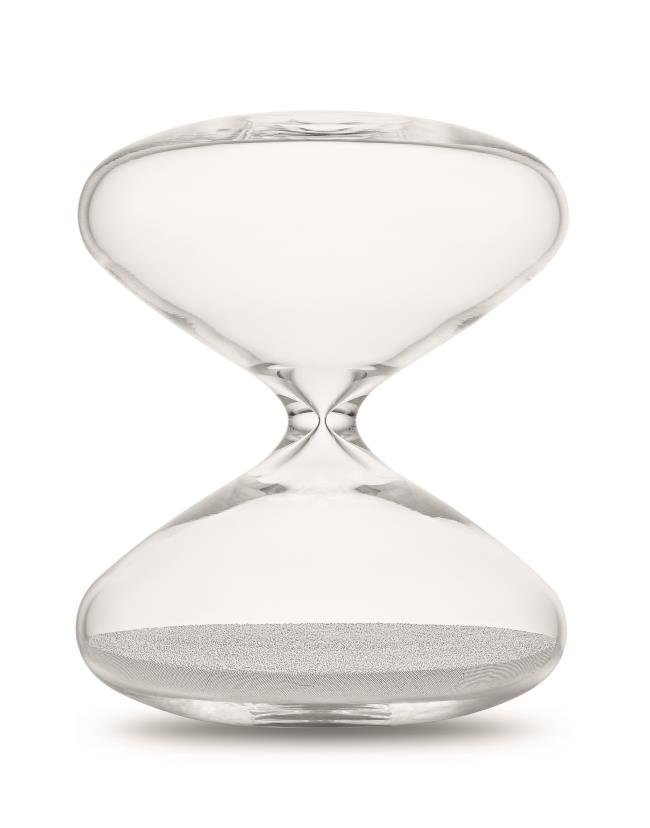 MEASURING TIME WITH GOLD
Famous Australian designer Marc Newson, one of the fathers of the Apple Watch, is back with a new version of his Hourglass. Blown from a single piece of borosilicate glass, it contains millions of tiny spheres made of stainless steel. Each and every one is precisely 0.6mm in diameter and coated with fine gold or silver. The precision balls fall and bounce in an erratic but mesmerising way.