There was once a time when ‘fashion’ was a dirty word in watchmaking. When a watch could either be technical or beautiful, but never both. Fashion watches served as the mechanical equivalent of the buxom blonde cliché; very pretty to look at with little going on upstairs.

Fast-forward to Baselworld 2014 and the opportunity on every CEO’s lips was the world of women’s complications. Fashion players such as Chanel, Dior, Hermès and Louis Vuitton – with but a relatively recent claim to watchmaking – were gaining technical ground on the historical houses of Geneva, offering products exclusively designed for their existing female clientele. It has become very clear in recent years that wealthy independent women are ready to spend large sums on mechanical timepieces, but what is ultimately lacking in the marketplace is choice. The most celebrated watchmakers in the world have historically focused 95% of their attention on the men’s market, as the majority of collectors have indeed been male.

It has become very clear in recent years that wealthy independent women are ready to spend large sums on mechanical timepieces.

When these brands did think about women, it had very little to do with what women want. Instead of designing products for a female audience, brands simply shrunk watches designed for men and finished them in rose gold with some diamonds to the dial. Increasingly sophisticated, wealthy and independent female watch collectors are looking for much much more.

For fashion watch brands this marked a tipping point, where the underdog managed an advantage. Fuelled by an innate understanding of what wealthy women want, houses such as Dior and Chanel were able to devise complicated products just for women, bolstered by their expertise with fine jewellery, legitimized with the help of exclusive movements made by the storied horologers of Geneva. Furthermore, iconic Haute Joaillerie houses have further finessed their watchmaking expertise to bring more natively feminine timepieces to market. Houses such as Van Cleef & Arpels, Cartier and Piaget have perhaps benefited from the knowledge and technology found at fellow-Richemont manufactures like Vacheron Constantin, Baume & Mercier and Jaeger-LeCoultre. Their longstanding expertise in designing fine jewellery for women, coupled with innovating watchmaking technology at ‘family’ brands, has no doubt led to an increase of exceptional pieces for women, where mechanical excellence sits equal with rarefied beauty.

As a result the industry for beautiful and technical women’s watches has mobilized, and as brands bring more inspiring products to the table, consumer interest is growing. For the 14 brands under consideration, 68% of searches in Q2 2014 were for ladies’ watches compared with 32% for men’s. The highest volume of searches for fashion and watch/jewellery brands was found in China, where 29% of all searches (of the 14 watch brands selected) were captured. China was the only geographical region in the top five where interest grew, up 6%. All other markets – the U.S., U.K, France and Italy – all registered a decrease in interest, between 3 and 9%. 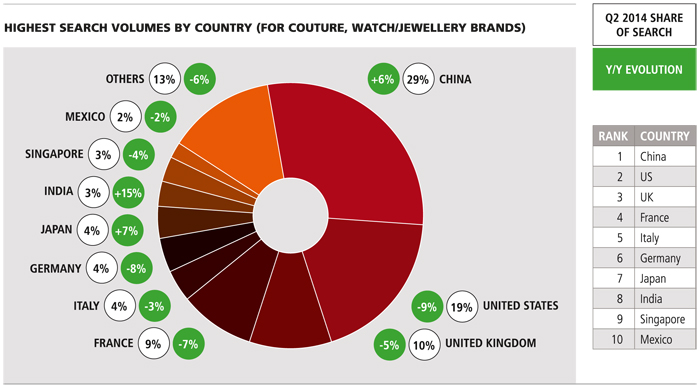 This is perhaps unsurprising when we consider the difference between the newer Chinese female luxury consumer and that of their western counterparts in luxury markets considered developed. According to Bain & Co., men accounted for 90% of China’s high-end purchases in 1995. Today women make up about half, yet still trail the global average in mature markets, where female consumers account for about two-thirds (Bloomberg http://www.europastar.biz/bloomberg). According to local analysts, “Chinese women are becoming more independent, becoming richer, and are buying for themselves,” as the market begins to re-balance its offering between women and men. Whilst the men’s timepiece category will continue to be impacted by anti-corruption laws and a crackdown on gifting, perhaps the future opportunity lies in the increasingly sophisticated desires of Chinese women. 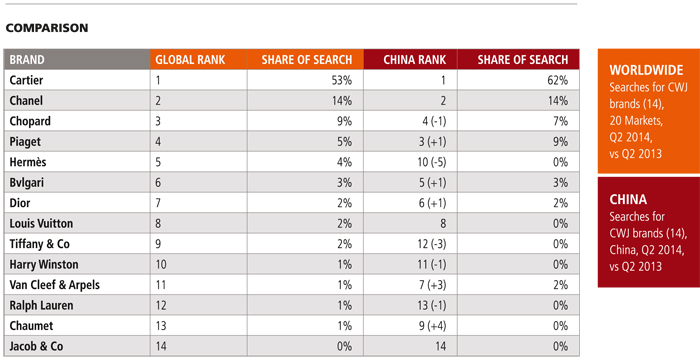 Men accounted for 90% of China’s high-end purchases in 1995. Today women make up about half.

Cartier, in terms of online consumer interest, is by far the most popular choice in ladies’ watches both across 20 markets and in China. Global interest only grew by 5% in the comparison period, but in China it increased by 26%, to achieve nearly two-thirds of all searches for these 14 brands. Chanel commands the same share of search in China (for ladies’ watches) as it does on a global scale (14%), as do Hermès and Dior. What was particularly interesting to note that whilst Chaumet ranked 13th on a global scale, in China the brand jumped to 9th place. A similar story at Van Cleef & Arpels, which ranked 11th overall but was the 7th most-searched for brand in China. On a global scale, Hermès ranks 5th in the world when it comes to searches of women’s watches, yet the brand only ranks 10th in China. Interest in the brand year-on-year dropped a whopping 63%, perhaps reflecting an overall shift in the Chinese market, whereby consumers are moving away from globally recognised luxury brands in a search for something from a niche brand.

Or indeed brands with original roots in jewellery and watchmaking, as consumers become more sophisticated and knowledgeable about timepieces. The big increases in interest came from historical lesser-known jewellery and watch manufacturers, such as Chaumet (+129%) and Chopard (+162%). Further supporting this idea was a drop of interest at Louis Vuitton (-45%), Chanel (-52%), Tiffany & Co (-89%) and Ralph Lauren (-31%), four of the biggest and most recognised luxury brands in the world. According to DemandTracker data, Louis Vuitton’s -45% drop was the result of an overall drop in interest for the brand. At Chanel, the -52% decrease can be attributed to a reduction in searches for the price of Chanel watches and the J12. But looking more broadly at Chanel search terms, there is a growing interest for Chanel’s Paris boutiques from China (up 28%). Overall Chinese consumers are increasingly looking for the store locations of luxury brands in the UK, specifically for the 14 brands mentioned above. Meanwhile searches for Singapore and Hong Kong have either dropped or levelled out. This is likely a result of increased wealth and mobility by Mainland Chinese, coupled with more relaxed visa procedures and the reduced cost of travel.

WOMEN’S WATCHES OF THE FUTURE

It’s clear that the interest in women’s watches from houses traditionally rooted in fashion and fine jewellery is there, but rather like the market, it is currently fragmented and unpredictable. Many claim that Chanel created a new category in 2000 when they launched the J12, yet almost fifteen years on the industry is far from consolidated.

Traditional Haute Horlogerie brands are just getting their toes wet when it comes to outstanding timepieces for women, deliberately designed for women. Fine jewellery houses are starting to make a more significant play into more watchmaking territory, whilst fashion brands are working to establish their credibility and excellence in the manufacturing field. Essentially, the three groups with the potential to create exceptional timepieces for women are all at various stages of development. But where some may find competitive advantage is within new comprehensive corporate structures, incorporating luxury brands from a myriad of categories, and therefore fast-tracking the individual elements it may require to bring these products to market. 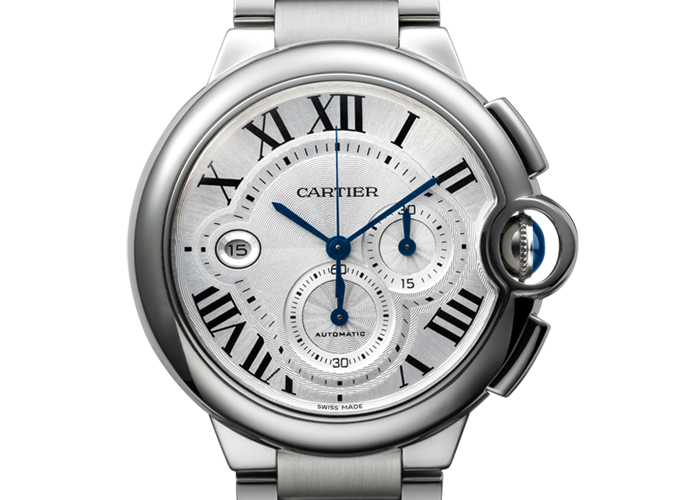 Take for example Kering’s recent acquisition of Uylsse Nardin, its biggest stride into the world of Haute Horlogerie yet. Kering has reinforced its watchmaking position alongside Girard-Perregaux, but can also draw from its fine jewellery brands Boucheron, Pomellato and Qeelin. Not to mention design, marketing and communication cues from global fashion brands like Gucci, Bottega Veneta and Saint Laurent Paris.

Before us all lies a world of opportunities for women’s watches.

The same could be said of Louis Vuitton and Dior at LVMH, whose watch and jewellery business could be aided by the 2012 acquisition of Boucheron. And of course unbridled success at Hublot and TAG Heuer. Brands within the Swatch Group – namely Omega, Breguet, Blancpain, Jaquet Droz and Glashütte Original – could be set to benefit from the acquisition of Harry Winston, and the famed-jewellers longstanding experience working with women. Whichever way you look at it, before us all lies a world of opportunities for women’s watches. 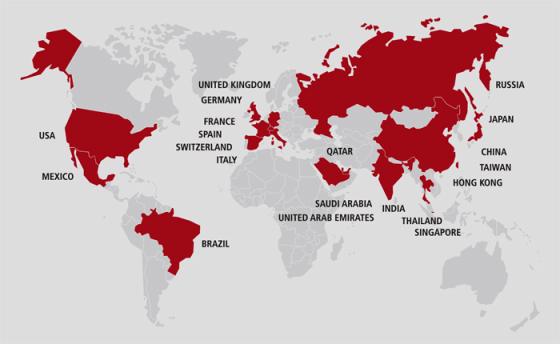 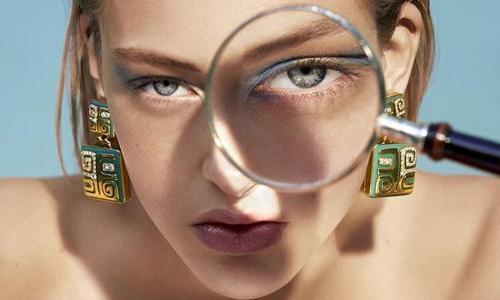 Following its launch in February, Bulgari has announced the winner of the Swiss Genius Awards. The first ever prize for innovation in corporate social (...)