WorldWatchReport 2012: China overtakes, Omega closes in on Rolex and other key findings


WorldWatchReport 2012: China overtakes, Omega closes in on Rolex and other key findings

BackgroundSince 2004, the WorldWatchReport™, published by the Digital Luxury Group in partnership with Europa Star, has provided the industry with an exclusive analysis of the interests and preferences of luxury watch consumers around the world. Based on a methodology utilising Digital Luxury Group’s proprietary technology, the report identifies and analyses over 1 billion watch-related searches and translates them into client intentions related to brands, models, distribution, replicas, price, and accessories.

The study tracks 40 of the most renowned luxury watch brands in the top 20 markets across the globe:

Market dynamicsWith a visibility across 20 countries, the analysis tracks which markets have the highest affinity for luxury watches and how they change over time. For the first time since the study launched in 2004, China overtook the USA as the country exhibiting the highest demand for luxury watches, representing 23 per cent of all watch-related searches. In fact, most of the global demand was fuelled by the East. Beyond China, Japan, India and Russia saw increases over last year, while most western markets experienced significant market share drops, especially the US, Germany and Italy. Brazil, often described as a fast-emerging luxury market, remained stagnant this past year, neither gaining nor losing market share in comparison to other luxury watch markets.

Demand strong in ChinaComing of no surprise to those working for luxury watch brands is the continued strength of China in driving overall watch demand. Composed of three major regions and 56 ethnic groups, China’s diversity requires an in-depth understanding of local culture and clientele preferences, and this is no different when analysing the interest for luxury watches.Coastal China, represented by major cities such as Beijing, Shanghai, Hangzhou, and Dalian, represented 57 per cent of the nation’s demand for luxury timepieces, highlighting that the luxury markets in central China are still to be developed, a potential opportunity for brands.In addition to differing levels of demand across China, the interest for particular brands is stronger in some regions over others. Omega and Longines hold the top two positions in most Chinese provinces, but the people of Guangdong province have a preference for Rolex, Cartier is much stronger in Shanghai than anywhere else, Patek Philippe ranks highly in Beijing and Vacheron Constantin does comparatively well in Zhejiang and Jiangsu. 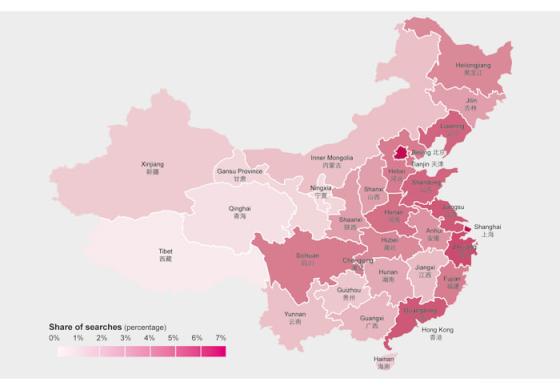 DEMAND FOR LUXURY WATCHES IN CHINA | REGIONAL SEARCHES.Share of searches by administrative division

Most popular watch modelsAmong the 1,300+ individual watch models tracked by the WorldWatchReport, the top 10 models alone account for 30 per cent of the worldwide demand. Unchanged for the last three consecutive years, Omega’s Seamaster, Rolex’s Submariner and Rolex’s Daytona capture the greatest model-level interest. Noteworthy are TAG Heuer’s Carrera and Cartier’s Tank, which continue to remain strong in the lexicon of luxury watch models. 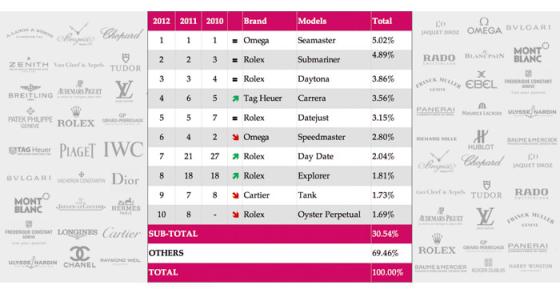 Counterfeits less interesting for the Chinese Research shows that global searches related to counterfeits and replicas experienced a relative decrease, representing 1.85 per cent of total luxury watch searches compared to 4.5 per cent last year. Amongst the 40 brands analysed, sport watches seem to be the most at risk for counterfeit interest, with Hublot, Rolex and Breitling receiving 4.5 per cent, 4 per cent and 3 per cent respectively of total searches for their brands linked to replicas – more than any other brand.In the case of China, last year’s study showed that 2.1 per cent of luxury watch searches were related to replicas, whereas this year that figure has dropped to 0.51 per cent. This shows evidence of a potential reduction in counterfeit watch sales in China a trend noticed across other luxury industry segments and confirmed by a recent study published in The Economist… good news for the industry!

Omega gaining ground on RolexTaking a closer look at the interest expressed in search engines for the two industry leaders shows that the gap Rolex held over Omega in 2009 is quickly closing in. In this year’s study the difference between the two is only a few percentage points. Accelerated by sponsorship activity at the Beijing Olympic Games in 2008, Omega’s development in China has been swift. In 2012, this Swatch Group brand became the most searched for brand in the country, with 20.2 per cent of total luxury watch related searches - against Rolex’s 10.5 per cent.It’s hard to predict what the upcoming year(s) will show, but if the trend persists we might see a dethroning of Rolex by 2014.

MARKET SHARE EVOLUTION OF THE TWO INDUSTRY LEADERSRolex vs. Omega

For more information about the WorldWatchReport™, published by Digital Luxury Group in partnership with Europa Star on an annual basis, please visit www.worldwatchreport.com.